Darwin as a Universal Principle 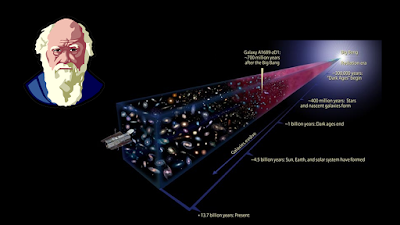 3) natural selection (selective mechanism based on some criterion).

A fourth feature, one that underlies all three of these points, is the production and maintenance of populations (e.g. population dynamics). These features are a starting point for many applications of universal Darwinism. Depending on the context of the application,these four features may be emphasized in different ways or additional features may be added.

Taken collectively, these three features constitute many different types of process, encompassing evolutionary epistemology [1] to cultural systems [2], neural systems [3, 4], physical systems [5, 6], and informational/cybernetic systems [7, 8]. Many of these universal applications are explicitly selectionist, and do not have uniform fitness criteria. In fact, fitness is assumed in the adaptive mechanism. This provides a very loose analogy to organismal evolution indeed. 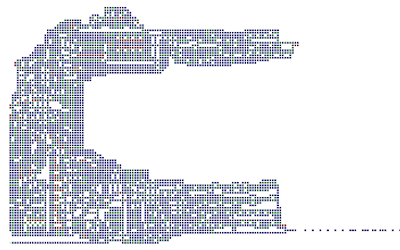 Of these, the application to cybernetic systems is the most general. Taking inspiration from both cybernetics theory and the selectionist aspects of Darwinian models, Universal Selection Theory [7, 8] has four basic claims that can be paraphrased in the following three statements:

2) "process itself reveals information about the environment".

The key notions are that evolution acts to randomly generate variation, retains only the most fit solutions, then builds upon this in a modular and hierarchical manner. In this way, universal Darwinian processes act to build complexity. As with the initial list of features, the formation and maintenance of populations is an important bootstrapping and feedback mechanism. Populations and heredity underlie all Darwinian processes, even if they are not defined in the same manner as biological populations. Therefore, all applications of Darwinian principles must at least provide an analogue to dynamic populations, even at a superficial level.

There is an additional advantage of using universal Darwinian models: capturing the essence of Darwinian processes in a statistical model. Commonalities between Darwinian processes and Bayesian inference [3, 5] can be proposed as a mechanism for change in models of cosmic evolution. In the Darwinian-Bayesian comparison, heredity and selection are approximated using the relationship between statistical priors and empirical observation. The theoretical and conceptual connections between phylogeny, populations, and Bayesian priors is a post-worthy topic in and of itself.

At this point, we can step out a bit and discuss the origins of universal Darwinian systems. The origin of a Darwinian (or evolutionary) system can take a number of forms [9]. There are two forms of "being from nothingness" in [9] that could be proposed as origin points for Darwinian systems. The first is an origin in the lowest possible energetic (or in our case also fitness) state, and the other is what exists when you remove the governance of natural laws. While the former is easily modeled using variations of the NK model (which can be generalized across different types of systems), the latter is more interesting and is potentially even more universal. 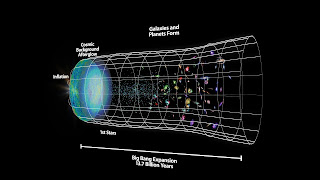 So did Darwin essentially construct a "theory of everything" over 200 years ago? Did he find "42" in the Galapagos while observing finches and tortoises? There are a number of features from complexity theory that might also fit into the schema of Darwinian models. These include concepts from self-organization not explicitly part of the Darwinian formulation: scaling and complexity, dependence on initial condition, tradeoffs between exploitation and exploration, and  order arising from local interactions in a disordered system. More explicitly, contributions from chaos theory might provide a bridge between nonlinear adaptive mechanisms and natural selection.

The final relationship I would like to touch on here is a comparison between Darwinian processes and Universality in complex systems. The simplest definition of Universality states that the properties of a system are independent of the dynamical details and behavior of the system. Universal properties such as scale-free behavior [10] and conformation to a power law [11] occur in a wide range of systems, from biological to physical and from behavioral to social systems. Much like applications of Universal Darwinism, Universality allows us to observe commonalities among entities as diverse as human cultures, organismal orders/genera, and galaxies/universes. The link to Universality also provides a basis for the abstraction of a system's Darwinian properties. This is the key to developing more representationally-complete computational models. 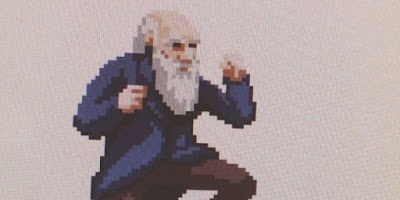 
Darwin viewed his theory development of evolution by natural selection as an exercise in inductive empiricism [12]. Ironically, people are now using his purely observational exercise as inspiration for theoretical mechanisms for systems from the natural world and beyond.

Things that Just Happened in London..... 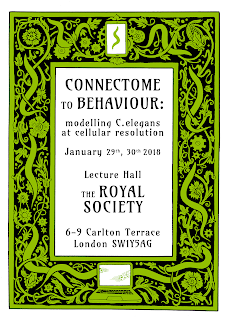 This week, the Royal Society is hosting a workshop called "From Connectome to Behavior", hosted by the OpenWorm Foundation. A program can be found here. 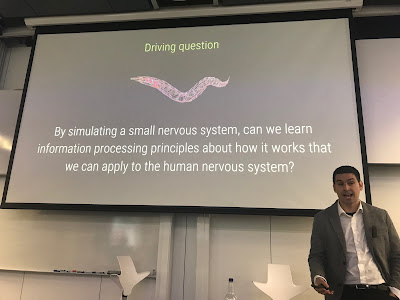 The Monday and Tuesday sessions included talks by OpenWorm senior contributors as well as mathematical, biological, and engineering researchers from around the world (including John White, a C. elegans  research legend). Fortunately, you can get a taste for the topical diversity on the OpenWorm Twitter feed, and from the screenshots below. 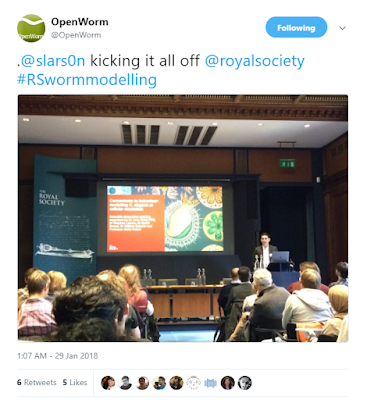 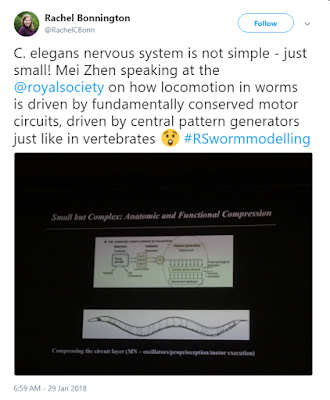 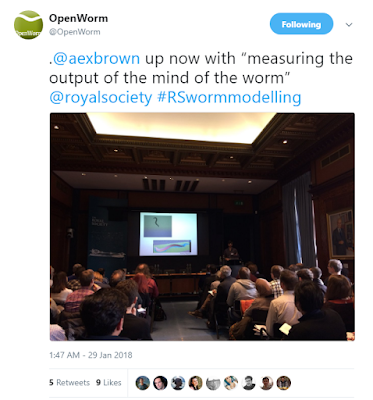 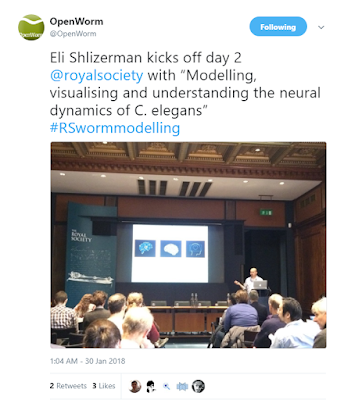 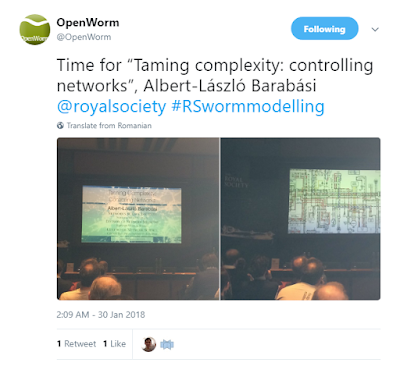 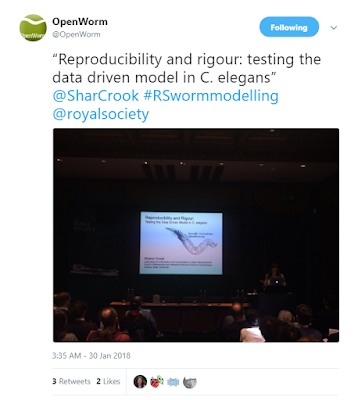 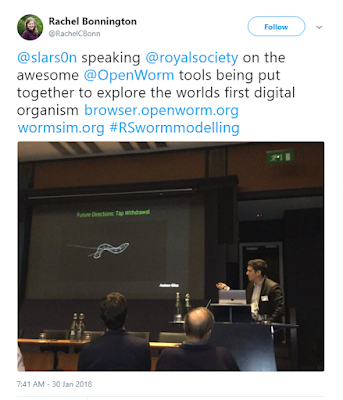 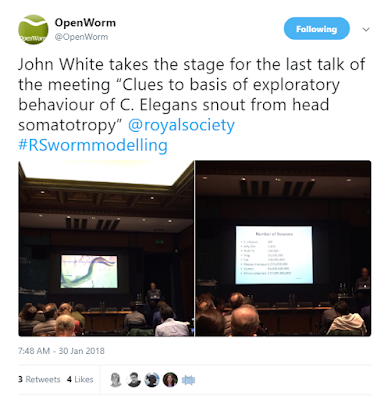 The Wednesday session was a day for demos and less formal talks, as evidenced by the robotics contingent showing off their latest hardware. Living worms also made an appearance! 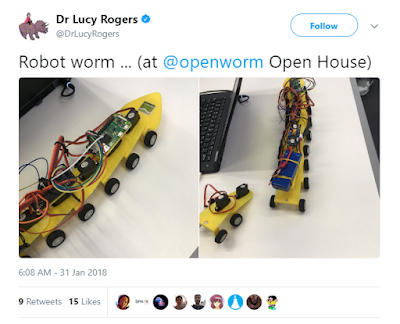 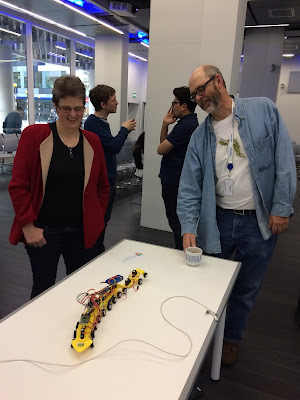 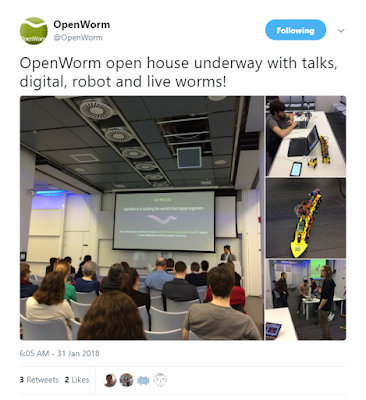 How good is the OpenWorm simulation suite? Take a simple test: which one is the real worm, the worm on the left or the worm on the right? View the video footage and vote here. 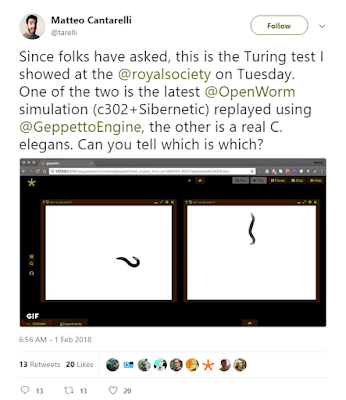 Here is some OpenWorm-related artwork on display, designs by Matteo Farinella. 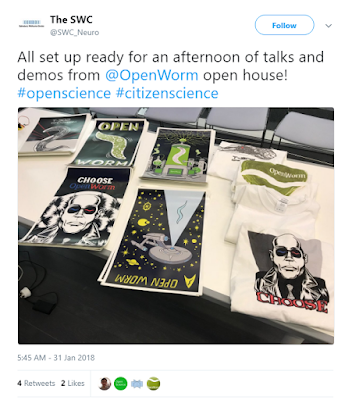 If what you see here looks good and you would like to learn more, please get in touch with the OpenWorm community! Hope to see you soon! 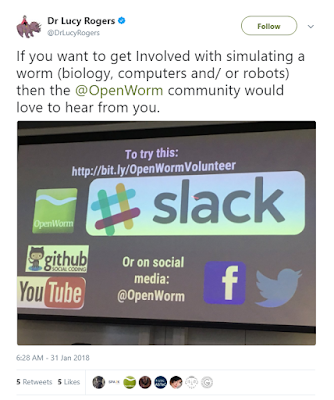 Thanks to the Royal Society of London for being an excellent host! 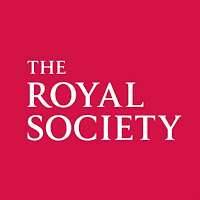