I attended the Richard Dawkins talk at MSU the other night. This was part of their WorldView lecture series. This was the first event in the series for which the Wharton Center was sold out (about 1200 or so seats). I have now attended lectures from four great minds in evolution: Richard Dawkins and E.O. Wilson (at Michigan State) and Ernst Mayr and Steven Jay Gould (at the University of Florida). Dawkins is good for
his combination of scientific and religious skepticism with evolutionary biology, which was in full form the other night.

The Dawkins talk was called "The Purpose of Purpose", and was a good general audience talk. I noticed how self-promoting the whole Dawkins enterprise was: his website looks like its part e-commerce website, part self-help guru website. This is a good model for aspiring intellectual brokers (e.g people who want to become rich and famous in exchange for 10 years of higher education). Anyways, the talk was about how not everything in the world around us has "purpose" (e.g. got there via a designer or is there for our utilization), and how things that look like they have purpose and things that DO have conscious purpose (such as art or human artifacts). 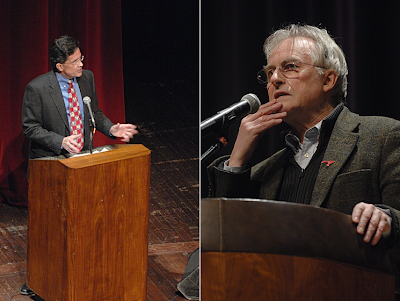 To accomplish this, he broke down purpose into two different types: archipurpose and neopurpose. Archipurpose involves things that are causal but not neccessarily purposeful (like a bird's wings or stars in the universe). When pre-scientific peoples looked up into the sky, they assumed that the stars were put there by God for our pleasure. They then built monuments and sacrified virgins accordingly. On the other hand, neopurpose is the direct byproduct of conscious intervention, and its products generally serve a definable purpose. This is not to be confused with the purpose of a bird's wing -- wings are there so that the bird can fly, but got there via natural selection rather than by a master
designer.

There were parts of the talk where he seemed a bit sluggish (perhaps it was just my imagination). The old Dawkins chestnut that our bodies are the vessels for our genes (and thus serve an archipurpose) was used as an example. while I understand what he is saying, I think that specific argument is a bit shortsighted. He also contrasted domesticated species, whose evolution is governed by neopurpose (artificial selection by human breeders) with wild, naturally-selected species. I thought this was an excellent way to drive this point home, and wished he had spent a bit more time exploring this theme. But overall, it was an outstanding talk.

Fred Dyer, the chair of our Zoology Department, fielded questions from the audience. At WorldView, questions are solicited from the audience and the moderator fields the best of the crop. This works well, since giving the mike to audience members in a first come, first serve fashion can lead to really bad questions. Dawkins revealed that he was not dogmatic about his atheism and skepticism: he would gladly change his mind in a heartbeat if he saw convincing scientific evidence of God. He also has no time for homeopathic medicine, which reminds me of a great quote from the Futurama episode "Crimes of the Hot":

Human: I have a degree in homeopathic medicine!

Robot: You have a degree in boloney!

Dawkins is currently on a barnstorming tour across the USA. If you can catch one of his speaking engagements, I highly recommend it.
Posted by Bradly Alicea at 9:40 AM No comments: