Here is a new paper from the bioRxiv on experimental evolution in Nematodes titled "Evolution in Eggs and Phases: experimental evolution of fecundity and reproductive timing in Caenorhabditis elegans". This represents work done during 2015 in Nathan Schroeder's laboratory at UIUC [1], and is published as part of the new Reproduction and Developmental Plasticity theme in the DevoWorm group (currently consisting of just myself). Here is the abstract:


To examine the role of natural selection on fecundity in a variety of Caenorhabditis elegans genetic backgrounds, we used an experimental evolution protocol to evolve 14 distinct genetic strains over 15-20 generations. Beginning with three founder worms for each strain, we were able to generate 790 distinct genealogies, which provided information on both the effects of natural selection and the evolvability of each strain. Among these genotypes are a wildtype (N2) and a collection of mutants with targeted mutations in the daf-c, daf-d, and AMPK pathways. The overarching goal of our analysis is two-fold: to observe differences in reproductive fitness and observe related changes in reproductive timing. This yields two outcomes. The first is that the majority of selective effects on fecundity occur during the first few generations of evolution, while the negative selection for reproductive timing occurs on longer timescales. The second finding reveals that positive selection on fecundity results in positive and negative selection on reproductive timing, both of which are strain-dependent. Using a derivative of population size per generation called the reproductive carry-over (RCO) measure, it is found that the fluctuation and shape of the probability distribution may be informative in terms of developmental selection. While these consist of general patterns that transcend mutations in a specific gene, changes in the RCO measure may nevertheless be products of selection. In conclusion, we discuss the broader implications of these findings, particularly in the context of genotype-fitness maps and the role of uncharacterized mutations in individual variation and evolvability.

The entire dataset (genealogies for fecundity and reproductive carry-over measurements) is publically available. Below is a heat map (Figure 6 in the paper) featuring the distribution of that measurement for 14 wildtype and mutant genotypes. 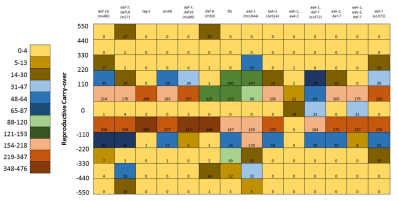