Science and Politics or Science versus Politics?

A few items on the intersection of politics and science (and the tension between the two). First up is an infographic that shows the relative frequency of various "science and engineering words" during the annual State of the Union (SOTU) address by all US Presidents since Teddy Roosevelt. The "science and tech" category is at the bottom, and has been an increasingly important component of these speeches over the last 40 years. 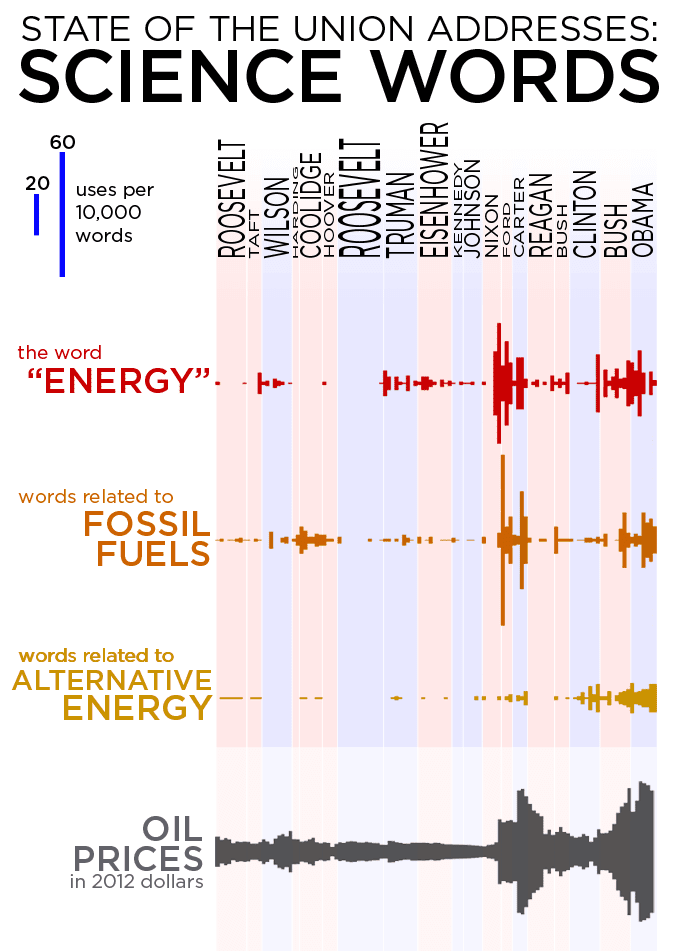 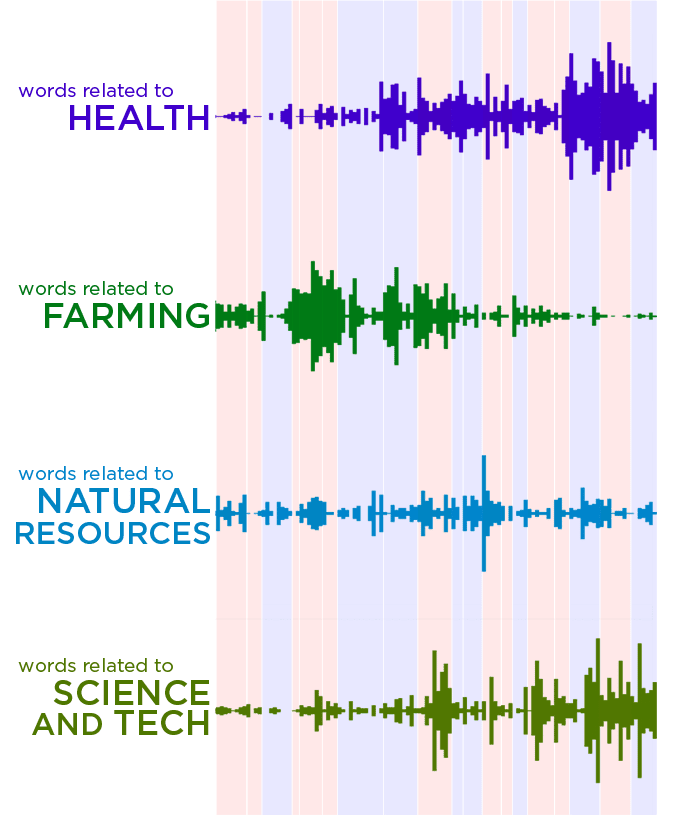 Related to societal relevance is the whole issue of political will and action on science-related topics. This is particularly true when it comes to policies that address Anthropogenic Global Warming (AGW). This point was not missed during the 2015 SOTU. However, one might wonder how effectively climate policy can be when most politicians have a cursory (at best) technical understanding of scientific issues. Perhaps advocacy for science policy (e.g. lobbying) is not enough after all -- perhaps we need more scientist-politicians. 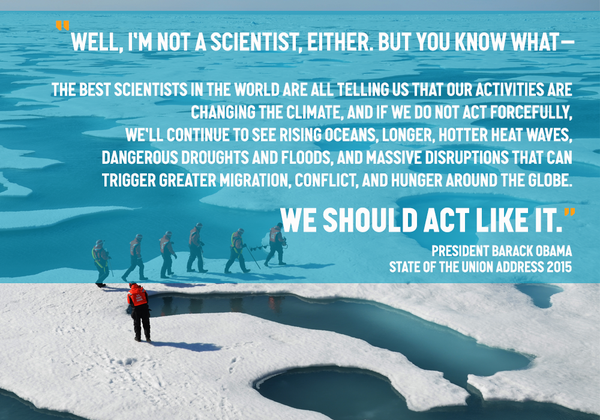 Many discussions of global warming (mostly involving denialists) involve an appeal to the scientific consensus. While the consensus does point strongly towards the reality of a human-induced warming of the planet, the discoveries that lead to this consensus were individualistic quests for data. The data were not voted into existance, and neither can consensus on a scientific issue [1]. While skepticism should come into play when considering the implications of findings, it should not play a role in judging conclusions drawn from isolated findings. For one example, please see this article by Ethan Siegel on Starts With a Bang! blog on why science by democracy (or popular consensus) does not represent how science is actually done. 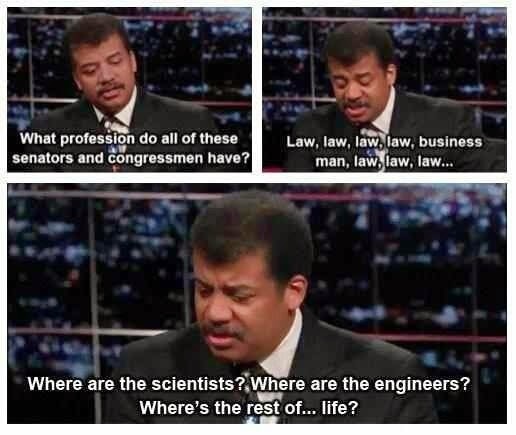 A call for scientist-politicians? COURTESY: Grady Carter blog (for the montage).

The final item in this post in a new Kickstarter/film initiative to bring awareness to the American space program. "Fight for Space" is a project to bring awareness of budgetary cuts to our scientific endeavors and the pressure to fulfill politically-approved missions. To change this state of affairs, check out the Planetary Society's advocacy efforts. The scientific mission of NASA has been yielding significant returns as of late [2], so help to keep this momentum going. 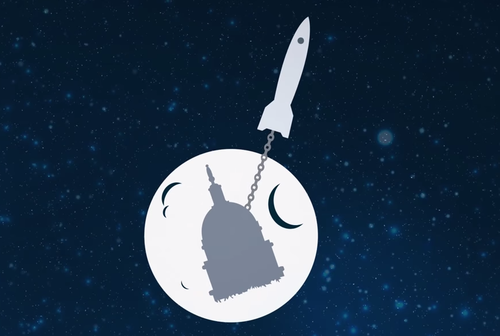 NOTES:
[1] The popularity of a set of ideas do not mean that they are scientifically credible. For more, see this article from Why Evolution is True regarding the lack of evidence for but popular persistence of proposals involving a divine origin of life.

[2] Recent excitement includes: the Dawn mission's approach to the dwarf planet Ceres, the confirmation of water and methane on Mars, and the monitoring of climate change from space.

I would like to announce the ramping up of a new science blog I am involved in called SciNote. Initially hosted (and still active) on Tumblr, SciNote is a collection of submissions by contributors, editors, and content discoverers. As of this month, I will be serving as the editorial supervisor. So check out the SciNote blog today. Perhaps you will be interested in submit content, supporting the blog's mission, or even joining the staff (on a voluntary basis).
Posted by Bradly Alicea at 11:55 AM No comments:

The Flow of Time, Science, and Archives

Here are a few milestones and interesting items to report for the New Year:

2014 was a good year for both space science and science in general. It's safe to say that the biggest story in science for 2014 was the successful landing of a probe (the Philae lander) on the surface of a comet (67p) by the European Space Agency. But the year was also not without dissapointments. Overall, many breakthrough findings and excellent papers occured in a number of fields. In the years ahead, it will be interesting to see what kinds of advances are made in 2015 from emerging work done during 2014.

If you are tired of celebrating another New Year according to the Gregorian calendar, here is an article from Futurity to make you consider an alternative. While the focus in this article is on the Hanke-Henry Permenant Calendar, there indeed is more than one way of dividing up the time it takes our planet to make a complete revolution around the Sun. This may or may not include calendars from other cultures, of course.

First milestone: The 24-year-old preprint server [1] arXiv published its one millionth (10^6th) paper on December 29, just in time for the new year. Despite being around for a quarter century, arXiv has become the template for an open access publishing revolution. Originally founded by Paul Ginsparg in 1991 [2], the bulk of the million paper total reflects impressive growth in the past several years. 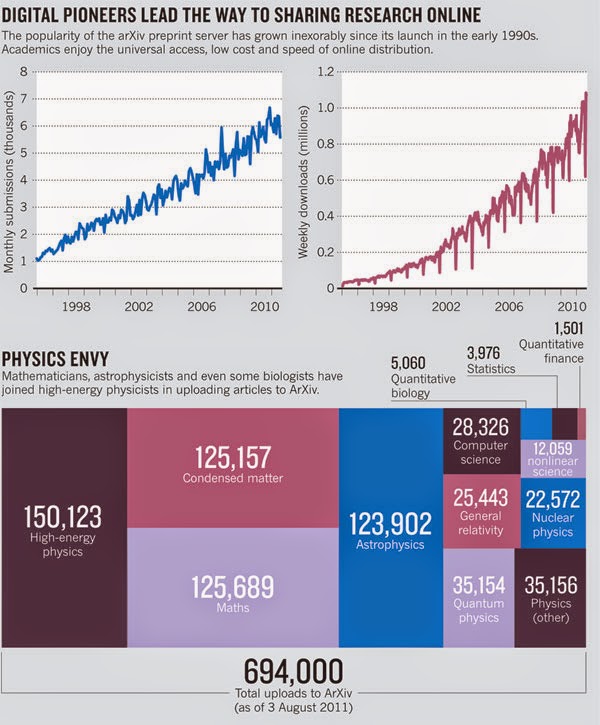 The lifespan of the arXiv in terms of growth over time and abundance of articles by field. COURTESY: arXiv and [2].

Second milestone: By the end of Monday, January 5th, Synthetic Daisies will have reached 120,000 readers. Much like the arXiv, the bulk of this growth has occured in the last few years. The blog was started in December, 2008, so I also wish the blog a Happy 6th Birthday [3].

[3] Is this actually possible, or is it more like worshipping a fetish? I guess for purposes of good form, I should create an avatar that represents "the blog".