An education-centric sketch of the OpenWorm and Orthogoanl Laboratory research ecosystems.

The first new badge series is an introduction to what is going on in the DevoWorm group, but also gives biologists and computationalists unfamiliar with Caenorhabditis elegans developmental biology a chance to get their feet wet by taking a multidisciplinary approach to the topic.

Worm Development II focuses on larval development, including the postembryonic lineage tree and what characterizes each life-history stage.


The second badge series is hosted on the Orthogonal Lab Badge System, and provides an overview of Peer Review issues and techniques. This series is meant to give young scholars a working familiarity with the process of peer review. It is notable that Publons Academy now offers a course on Peer Review, to which this badge might serve as an abbreviated complement.

Peer Review II delves into how to decompose an article for purposes of peer review. An evaluation strategy for post-publication peer review is also covered.

Posted by Bradly Alicea at 2:01 PM No comments:

Here is an interesting Twitter thread from Jacquelyn Gill on 'deep reading': 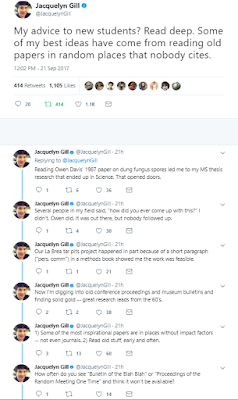 The basic idea is that exploring older literature can lead to new insights, which in turn lead to new research directions. The new research of our era tends to focus on the most relevant and cutting-edge literature [1]. This recency bias excludes many similarly relevant articles, including articles that perhaps inspired the more recent citations to begin with [2].

I have my own list of deep reads that have influenced some of my research in a similar fashion. These references can be either foundational or so-called "sleeping beauties" [3]. Regardless, I am doing my part to maintain connectivity [4] amongst academic citation networks:

An argument for biological rules, an influence on cladistics (developed in the 1960s), and a natural bridge to geometric approaches to data analysis and modeling. While there is a strong argument to be made against the axiomatic approach [5], this directly inspired much of my thinking in the biological modeling area.

This was the first proof-of-concept for direct cellular reprogramming, and predates the late 2000's Nobel-winning work in stem cells by decades. In this case, a single transcription factor (MyoD) was used to convert a cell from one phenotype to another without a strict regard for function. More generally, this paper helped inspired my thinking in the area of cellular reprogramming to go beyond a biological optimization or algorithmic approach [6].

"Design for a Brain" serves as a stand-in for the entirely of Ashby's bibliography, but this is the best example of how Ashby successfully merged explanations of adaptive behavior [7] with systems models (cybernetics). In fact, Ashby originally coined the phrase "Intelligence Augmentation" [8]. I first discovered Ashby's work while working in the area of Augmented Cognition, and has been more generally useful as inspiration for complex systems thinking.

4) Schroeder, M. Fractals, Chaos, and Power Laws: minutes from an infinite paradise. W.H. Freeman. 1991. AND Kauffman, S. At Home in the Universe: search for the laws of self-organization and complexity. Oxford University Press. 1995.

Not so much a couple of sleeping beauty as easy reading technical reference guides for all things complexity theory.

This is a bonus, not because the references are particularly obscure or even from the same academic field, but because they partially influenced my own view of cultural evolution. This is yet another piece of advice to young researchers: take things that appear to be disparate on their surface and incorporate them into your mental model. If nothing else, you will gain valuable skills in intellectual synthesis. 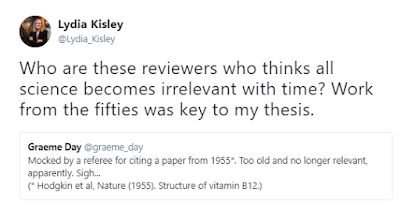 [2] related topics discussed on this blog include distributions of citation ages and most-cited papers.

[5] For the semantic approach (which had been influential to my more recent work), please see: Lloyd, E.A. (1994). The Structure and Confirmation of Evolutionary Theory. Princeton University Press, Princeton, NJ.