Battle of the (Worm) Bots

There is an fledgling initiative at the OpenWorm Foundation to build a worm robot. This post highlights some of the first steps towards this goal. OpenWorm Robots will be useful for educational purposes and movement experiments/validation. No soft robotics (or miniaturization) yet, but progress is also continually being made on the brains behind the bot. More videos are forthcoming, so stay tuned. Thanks go to Dr. Tom Portegys and Shane Gingell for their efforts.

This is Shane's first iteration, called RoboWorm. Note the sinusoidal movement, and then compare to a biological C. elegans.
Posted by Bradly Alicea at 3:45 PM No comments:

Wandering Towards an Essay of Laws 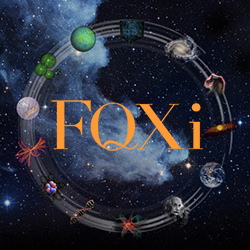 The winners of the FQXi "Wandering Towards a Goal" essay contest have been announced. I made an entry into the contest (my first FQXi contest entry) and did not win, but had a good time creating a number of interesting threads for future exploration.

The essay itself, "Inverting the Phenomenology of Mathematical Lawfulness to Establish the Conditions of Intention-like Goal-oriented Behavior" [1], is the product of my work in an area I call Physical Intelligence in addition to intellectual discussions with colleagues (acknowledged in the essay).

I did not have much time to polish and reflect upon the essay at the time it was submitted, but since then I have come up with a few additional points. So here are a few more focused observations extracted from the more exploratory essay form:

1) there is an underappreciated connection between biological physics, evolution, and psychophysics. There is an subtle but important research question here: why did some biological systems evolve in accordance with "law-like" behavior, while many others did not?

2) the question of whether mathematical laws are discovered or invented (Mathematical Platonism) may be highly relevant to the application of mathematical models in the biological and social sciences [2]. While mathematicians have a commonly encountered answer (laws are discovered, notation was invented), an answer based on discovering laws from empirically-driven observations will likely provide a different answer.

3) how exactly do we define laws in the context of empirical science? While laws can be demonstrated in the biological sciences [3], biology itself is not thought of as particularly lawful. According to [4], "laws" fall somewhere in-between hypotheses and theories. In this sense, laws are both exercises in prediction and part of theory-building. Historically, biologists have tended to employ statistical models without reference to theory, while physicists and chemists often use statistical models to demonstrate theoretical principles [5]. In fields such as biology or the social sciences, the use of different or novel analytical or symbolic paradigms might facilitate the discovery of lawlike invariants.

4) the inclusion of cybernetic principles (Ashby's Law of Requisite Variety) may also bring together new insights on how laws occur in biological and social systems, and whether such laws are based on deep structural regularities in nature (as argued in the FQXi essay) or the mode of representating empirical observations (an idea to be explored in another post).

[2] I experienced a nice discussion of this issue during an recent NSF-sponsored workshop. The bottom line is that while the variation typical of biology often makes the discovery of universal principles intractable, perhaps law discovery in biology simply requires a several hundred year investment in research (h/t Dr. Rob Phillips). For more, please see: 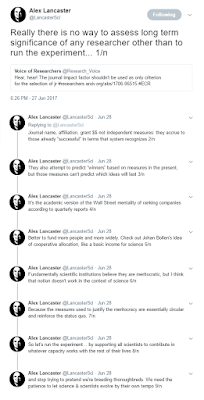 In academia, the term excellence is often used in the context of scarcity and competitive dynamics (e.g. publications, career promotion), and as a result can be used quite arbitrarily [1]. In [1], a distinction is made between excellence and soundness. Excellence is seen as a subjective concept, while soundness (enabled through completeness, thoroughness, and an emphasis on reproducibility) is the adherence to clearly defined and practiced research standards. While it may also be true that the concept of soundness can suffer from the same subjective limitations, it is probably an improvement over the current discussions surrounding excellence.

Another term we rarely refer to, but may be of even greater importance, is the relevance of scientific research. In a previous post, I brought relevance theory to bear on potential biases in scientific selectivity. One way to think of relevance is as the collective attentional focus of a given research group, community, or field. Collective attention (and thus relevance) can change with time: papers, methods, and influences rise and fall as research ideas are executed and new information is encountered [2]. As such, relevance defines the scope of scientific research that defines a particular field or community of researchers. Given a particular focus, what is relevant defines what is excellent. In this case, we return to the biases inherent in excellence, but this time with a framework for understanding what it means in a given context.

There is also an interesting relationship between soundness and relevance. For example, the stated goal of venues like PLoS One and Scientific Reports is to evaluate manuscripts based on methodological soundness rather than merely on field-specific relevance. To some extent this has eliminated issues of arbitrary selectivity, yet reviewers and editors from various fields may still surruptitiously impose their own field-specific conventions to the review process. Interestingly, soundness itself can be a matter of relevance, as the use of specific methodologies and modes of investigation can be highly field-specific.

Sometimes relevance is a matching problem between an individual researcher and the conventions of a specific field. Relevance can be represented as a formalized conceptual problem using skillset geometries [3]. In the example below, I have shown how the relevance of a specific individual overlaps with what is considered relevant in a specific field. In this case, the researcher has expertise in multiple areas of expertise, while the field is deeply rooted in a single domain of knowledge. The area of overlap, or Area of Mutual Relevance, describes the degree of shared relevance between individual and community (sometimes called "fit"). 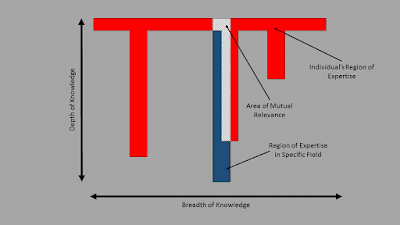 How relevant is a single person's skillset in the context of a research community, and how do we leverage this expertise in an inclusive manner? The mutual relevance criterion might provide opportunities in cases where there seems to be a "lack of fit". Understanding the role of collective attention within research communities might allow us to consider how this affects both the flow of new ideas between fields and the successful practice of interdisciplinarity.

[3] First introduced in: Alicea, B. (2017). A peripheral Darwin Day post, but centrality in his collaboration graph. Synthetic Daisies blog, February 16.
Posted by Bradly Alicea at 1:10 AM No comments: