Neutral networks are notoriously hard to map to a biological context. In this blog post, I will attempt to synthesize perspectives on neutral evolution and its consequences for evolving phenotypes using both computational and theoretical biology perspectives. I hope that this will synthesize the concept of neutral networks with existing theory on the evolutionary capacity of a given genotype and/or population, in addition to advancing some of my own thoughts on the subject. To do this, I will review past work on neutral networks, present formal definitions related to the neutral network concept, and then address overarching two hypotheses related to the concept of neutrality in evolutionary systems.

To fully appreciate what a neutral network represents, it is useful to revisit the role of neutrality in evolution. Motoo Kimura [1, also see Ohno’s contribution in 2, 3], as summarized in his book “Neutral Theory of Molecular Evolution“, was one of the first people to comprehensively explore the role of neutral mutations in evolution. Neutral mutations are those with no overall effect on the organism’s fitness or ability to survive and reproduce. According to the theory, most mutations occurring over the course of evolution have no effect with respect to fitness. One can think of this in terms of proportions. If 1000 mutations are observed in a made-up population of genotypes, 900 mutations will have no effect on fitness, while 70 will have a deleterious effect, and 30 will have a beneficial effect. The non-uniformity of this distribution means that while a few high fitness phenotypes could be produced at low frequencies, it is more likely that multiple solutions of lower but sufficient fitness is the more likely evolutionary outcome.

In parallel, neutral networks have been used by the evolutionary computation [4, 5], protein evolution [6], and complexity communities [7, 8] as a means to investigate evolvability. Inman Harvey has prepared a detailed resource summarizing the computational details of neutral networks [9] to which I refer interested readers. I have discussed evolvability before on this blog [10] and the way it has been defined in terms of phenotype. In this context, I am referring to the ability to evolve from one phenotypic state to another, which more explicitly involves changes in the genotype being both collectively and selectively expressed. In some cases, RNA phenotypes (which are technically phenotypes, but possess the discrete structure of a genotype) have been used to formalize the network structure as a hypercube.

In the last section, I defined fitness as the ability to “survive and reproduce”. This is a broadly construed ability, to be sure, but is related to how natural selection acts on a population. Let us make this more concrete. In the context of neutral networks, it is less helpful to think of natural selection as “survival of the fittest”, and more useful to consider the role of evolvability (e.g. the ability of a phenotype to adapt given a set of environmental conditions). We can use the example of word evolution in natural language to understand the role of possibilities (e.g. neutral pathways and evolvability) in evolution. The cartoon in Figure 1 shows an optimal path from one word (pinball) to another (partake). In this example, existing syntactical rules (e.g. what makes an English word such) constrain the number of possible pathways. Certain letter combinations are not allowed (which is analogous to fitness differences in biological neutral networks), and in this case only a few plausible pathways exist. Yet even in this simple example, there is room for innovation and thus the emergence of neutral pathways. 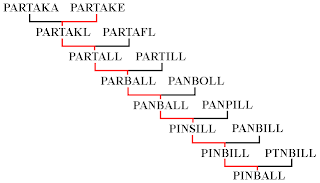 Neutral neighborhoods consist of neighbors with the same fitness. Harvey and Thompson [11] originally defined this as a manifold in a fitness space. This manifold defines a collection of points that share the same fitness. This manifold is also structured with regard to connectivity (based on mutational distance) between genotypes. Populations do not move randomly through neutral networks. A majority of individuals congregate towards highly-connected parts of fitness space. This results in phenotypes that are robust to mutations. In one model [12], a given allele is selectively neutral if it is translated and transcribed without error. However, the noise inherent in the process of transcription and translation may provide an additional reason why neutral networks not only exist but are necessary for the evolution of complex phenotypes.

Evolvability requires a "unsupervised" component to get from one phenotype to another, as this adaptive mechanism is stochastic. To address this, Whitehead et.al [12] tie neutrality into the "unsupervised" nature of evolving populations. Specifically, they remind us that mutations arise independently of their phenotypic consequences. To explain how genotypes can evolve to produce adaptive phenotypes in such a blinded context, they propose the "look-ahead" effect. The look-ahead effect takes advantage of neutrality, and the "diffuse" nature of phenotypes, where a small part of each phenotype is close to many genotypes. This is an example of how random, noisy phenotypes [see 13] can be guided towards adaptive ends. Whitehead et.al [12] also suggests that a scenario can exist where traits can be acquired with a certain probability. This ability may be a distinct trait, and gets there in evolution through a mechanism called facultative adaptation. Combined with evolutionary processes, facultative adaptations may become so refined that genes can be acquired and/or co-opted over evolutionary time to encode a trait directly.

If we could reduce the concept of neutral networks to a simple dictum, it would be "the path less taken versus the paths mostly taken". The next section of this post walks through how configuration entropy (a tool from statistical physics) can be used to understand the role of neutral genotypes in an evolutionary system. The following mathematical formalisms are adapted from what can be found in any number of textbooks on evolutionary biology and physics, but will allow us to understand how neutral networks relate to fitness and ultimately selection.

Configuration entropy is an analytical tool from the study of Hamiltonian dynamics (classical mechanics) which quantifies how many different ways particles can be arranged given a basic set of constraints. This will serve to evaluate the number of plausible evolutionary pathways among all possible configurations within a population of genotypes (e.g. evolutionary context). In a system of n states occurring with probability Pn, configuration entropy is

In this equation, the values of Pn can range from ω-1 (minimal entropy) to 1.0 (maximum entropy). Excluding Boltzmann’s constant (-kB), the right hand side of the equation is also the basic form of Shannon entropy. Shannon entropy is widely used to characterize informational entropy, or the heterogeneity of an ensemble. While this might be more appropriate for our investigation, I will now reformulate the configuration entropy equation to include a constant value for fitness

Therefore, once the relative abundance of plausible networks in a given evolutionary context is known, the common formulation for absolute fitness (wabs) can be used to sample all genotypes for a given fitness value. The absolute fitness for a subset of genotypes (N) after a single generation can be defined as

In this formulation, a value for wabs above 1.0 is indicative of a more-fit phenotype. The absolute fitness can also be transformed into relative fitness, and then transformed again into a selection coefficient. The selection coefficient is an index with values closer to 1.0 representing increasingly stronger selection. It may be helpful to think of this process for determining equivalent pathways as a form of natural profiling. For any given fitness outcome, a proportion of neutral states will be occupied. For example, high fitness ensembles (profiles at a given fitness value) may result in fewer neutral paths taken, while lower fitness ensembles might result in a greater number of neutral paths taken. This strictly proportional relationship may be indicative of an optimization process. To better understand the role of optimization in evolution, the question we will now ask is: for a given fitness value (and, by extension, degree of selection), how many different paths through genotype space are taken? 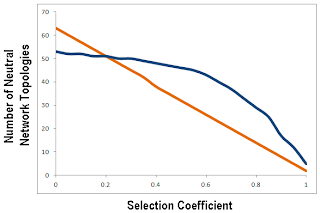 Figure 2. A graph showing functions associated with the linear and nonlinear hypotheses.

Table 1. A contingency table resulting from the relationship between the number of neutral pathways and selection coefficient value shown in Figure 2.

While Figure 2 shows the expected results for our two hypotheses, Table 1 takes this a step further and predicts what should be observed for particular selection coefficient/neutral pathway abundance combinations. It is predicted that for high degrees of selection, robustness plays a role in determining the neutrality of an evolutionary outcome, while the diversity of a population differentiate evolutionary responses given a common low degrees of selection.

To put these ideas about neutral networks in context, I recently gave a lecture in part based on a recent paper [14] that identified "rare" pathways from a differentiated cell to a pluripotent one. The idea behind this model was simple: it is known that there are a multitude of potential mechanisms (specific combinations of genes, epigenetic markers, etc) that mediate the differentiated cell-pluripotent cell transition [15], each contributing a different amount of variance. Some of these mechanisms explain more variance than do others. Therefore, a "rare" pathway is one that does not often result in a viable phenotype (or, rather, is responsible for the differentiated-pluripotent transition at a very low frequency). This is the other way in which neutral networks can act in evolution. A given genotype might harbor several distinct neutral networks, but each might only be responsible for large-scale phenotypic changes at a certain frequency.