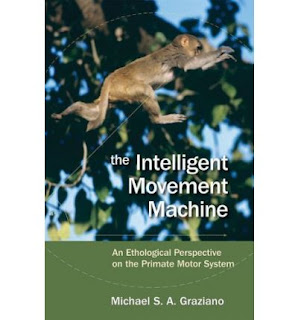 
The field of human, animal, and robotic movement, portions of which have gone by many names in the literature, is a vast and moderately synthesized area of study. Part of the problem is that only a few people bridge the multiple areas of specialty that are essential for a truly comprehensive understanding of movement. Michael Graziano is one of these key people. Graziano works on the electrophysiology of primate motor cortex, but also has an interest in how this translates into animal behavior. This explains the subtitle of the book: an ethological perspective. Graziano's synthesis is actually two-fold: one is to organize the literature on movement in a systematic manner, and the other is to unite observations of animal behavior with what we know about the underlying neural mechanisms.

Structure of the book
Since the field of movement as defined in the last section is only moderately synthesized, Graziano devotes a large section of the book towards bringing evidence to bear from the literature. The focus is on electrophysiology in Primates, so those hoping to understand movement phenomena outside of simple limb movements and feeding behaviors might come away disappointed. However, he does spend some time discussing personal space and movement behavior, which draws from his work on defensive postures. Despite his somewhat diverse choice of topics, he certainly does not make a unified field theory-type proposition.

While he may spend a few too many chapters on reviewing the current state-of-the-art, it sets up the last few chapters of the book. In this portion of the book, Graziano explains how he spent some time at the Bronx zoo to better understand what he was observing in electrophysiological experiments. Anyone who was spent time at a zoo realizes that non-human Primates exhibit many complex and sophisticated physical behaviors, even in captivity. In this sense, Graziano's approach is a sorely needed addition to the literature.

Heart of the neuroethological approach
Ethology is different from approaches to human behavior in that the former focuses on fixed action patterns. These action patterns can range from preening to arm waving to head shaking. Typically, such behaviors are relatively easily quantifiable in that they are discrete and repetitive. In this way, fixed action patterns are also thought to have a relatively simple neural basis. Graziano uses this framework to explain how behaviors observed in nature are produced at the single-cell level. This is one way of resolving a frustration from earlier in his career that involved the constricted behavioral repertoire observed during traditional electrophysiological recordings.

One criticism of this approach, of course, is how complex movement observed in naturalistic settings map to electrophysiological results collected in highly-artificial environments. This returns us to Graziano's early-career angst and how these two approaches can be reconciled in the first place. On the one hand, he has certainly succeeded at thought-provocation. This work adds a critical missing piece to the story behind movement, and how it relates to both species differences and symbolic behavior. However, we must keep in mind that movement involving many different components is not simply additive, and that what might explain an isolated movement might not be the whole story when naturalistic movements are taken into account.

One statement that particularly resonated with me was a statement to the effect that some electrophysiologists think Graziano's approach is crazy. I think this statement sums up one of the biggest unsung problems in science today: although "interdisciplinary research" is a popular buzzword, most scientists have no idea how to appreciate the approaches of their colleagues in other fields. This has been an ongoing frustration in my own life, and I am not entirely convinced that such skills can be taught. Aside from sociological griping, the scientific basis of the book is most definitely sound. I find it a reasonable and innovative approach to a problem that has in some ways been studied to death, yet in other ways is still vaguely understood.
Posted by Bradly Alicea at 3:12 PM No comments: