The theoretical physicist/surfer Garrett Lisi has a long-range vision called the scientific hostel. A scientific hostel is a facility (in a desirable location such as Maui) where scientists can visit and do science/interact for short periods of time.

I have pursued another type of collective scientific endeavor called the theory hackathon [1]. The initial version of this idea occurred in November 2014 when Dr. Richard Gordon (part of the DevoWorm project) visited Champaign-Urbana for a few days of collaboration and discussion. The proceedings here hosted by Orthogonal Research.

In their original form, hackathons are multi-day events that bring programmers together from far-flung physical locations. The "hacking" involves solving problems in a collaborative atmosphere, with the extended period of collaboration allowing for participants to benefit from "extended cognitive flow" [2]. A theory hackathon is quite similar, except that instead of programmers solving programming puzzles, theorists work to solve scientific puzzles. 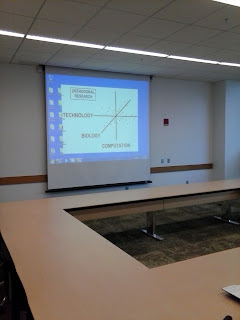 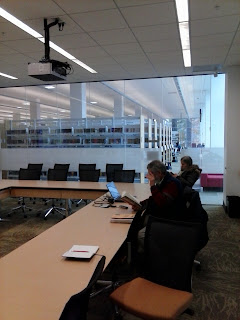 Some images of the hackathon proceedings (lecture component taken at the Champaign (IL) Public Library).


The basic outline of a theory hackathon (held over several days) involves three interrelated activities: exploration of ideas, organizational sessions, and a formal talk. The session held between Richard and I was primarily to flesh out some pre-existing ideas, but this could be done on a larger scale and with a more formalized schedule. 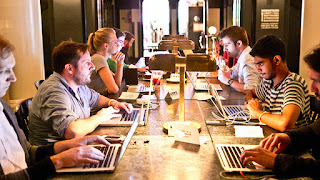 Traditional Hackathon, with programming and programmers.

Beginnings of a theory hackathon?

As mentioned previously, our hackathon session was pretty informal. A more formal framework might include several activities:

* one-on-one or small group brainstorming sessions. This can be done using a electronic whiteboard or Python notebook to keep track of the cumulative efforts. The idea is to collectively explore a problem and develop as much of a solution as you can in a few hours.

* discussions and follow-ups on previous and outstanding projects. This is largely organizational, but including the housekeeping function as a part of the theory hackathon can drive forward those old ideas in new ideas. It's the "fresh eyes for an old problem" principle at work.

* semi-public lectures. Part of developing theory is working at organizing concepts, references, and data in a lecture format. This part ofo the theory hackathon might involve developing a lecture either ad-hoc or in advance, and then deconstructing the contents in a group setting.

Theory hackathons can be organized around a specific topic (e.g. developmental biology), or the mechanics of theory-building itself [3]. Either way, they can lead to fruitful collaborations and long-lasting ideas. If not, there will still be fledgling ideas to follow up on. While theory hackathons will undoubetedly produce many loose ends, subsequent collaborative meetings and hackathons can help advance this work further.

UPDATE (5/21/2018): If you want to develop your own Hackathon, please check out the badge series on Hackathons, hosted by the OpenWorm Foundation (on Badgelist). Begin with planning your agenda (Hackathon I), then move on to putting your plan into action (Hackathon II, Hackathon III).

NOTES:
[1] h/t Stephen Larson, for coining this phrase during one of our meetings.

Posted by Bradly Alicea at 12:01 PM No comments:

Having a Positive Celestial Body Image is Important

Lots of planetary science news in the last few weeks. Between the arrival of the New Horizons probe at the Pluto mini-system and the discovery of the Kepler-452b exoplanet, lots of great pictures to behold. And as is often the case, space science leads to greater knowledge about our own planet, but more about that at the end of the post.

As the New Horizons probe approached Pluto, we began to gain an appreciation for this far-flung corner of the solar system. This includes the planet itself, which may exhibit Nitrogen cycling between its atmosphere and surface glaciers. 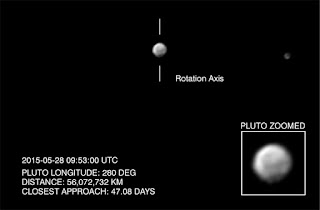 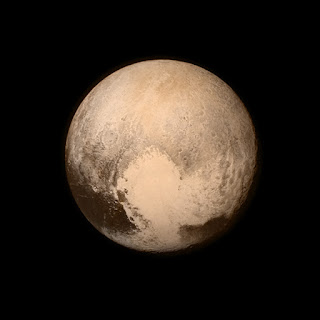 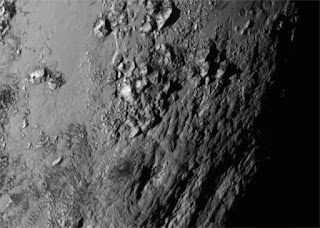 The anticipation builds as one zooms in. COURTESY: Discovery News.

Not only do we have an up-close accounting of Pluto's surface, we also gained knowledge about Pluto's environs, which consists of a number of celestial bodies. The two main bodies are Pluto and its main moon Charon. Notably, Pluto and Charon orbit a common center-of-gravity, which is a bit different from the relationship between Earth and the Moon. 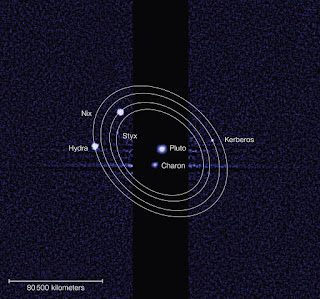 While the discovery of exoplanets is no longer news, ones that resemble Earth still cause people to stand up and take notice. The latest exoplanet discovery is called Kepler-452b, which is within the circumstellar habitable zone of Kepler-186. 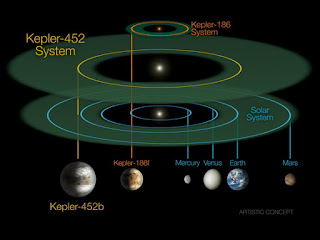 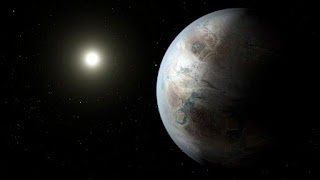 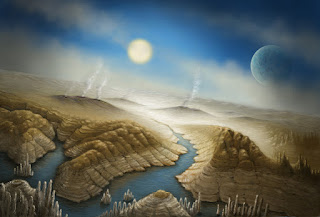 Finally, I would be remiss if I did not mention the possibility of an intense El Nino this coming year and the associated climatological modeling. 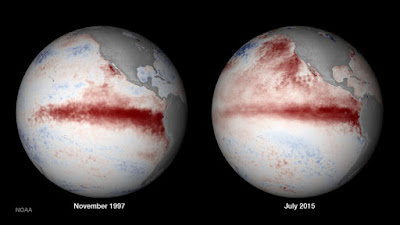 Posted by Bradly Alicea at 1:00 AM No comments: