Breaking Out From the Tyranny of the PPT 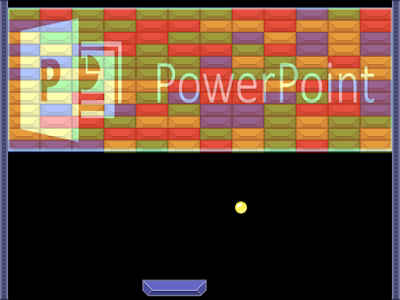 Player 1 vs. Powerpoint (with a screenshot of the game Breakout). The image itself was made in PowerPoint, but I promise this post will not be recursive nonsense.

By now, you have probably chosen a side in the PowerPoint debate: namely, does it enhance or hinder scholarly communication? I will present both sides of this argument, but not argue to moderation. Rather, I will show that PowerPoint is good (or good to get rid of) only if you define your own style of presentation. In either case, you will need to "break out" of the box containing typical advice for creating PowerPoint presentations.

A number of people have argued (both rhetorically and in practice) that PowerPoint represents an enforced tyrrany on presented information. It forces big ideas into small compartments, defined by slide optimization and bullet points. What follows are a few examples of PowerPoint tyranny, or cases in which the default style of organization imposes constraints on communication and the exchange of ideas.

A few years ago, Franck Frommer wrote a book on how PowerPoint makes us stupid [1]. Frommer's definition of stupid refers to impovrishing our ability to communicated logical flow, contextual detail, and the confusion of opinion and fact. Supprting this position is Peter Norvig's Gettysburg Address analysis, which suggests that the cognitive style of PowerPoint and its visual gimmickry often obscure rather than enhance the logical flow of a larger idea. 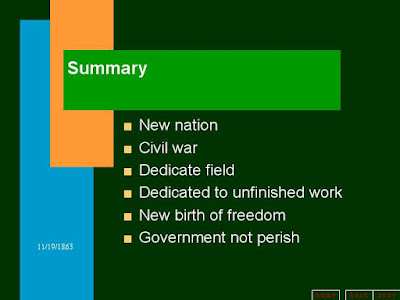 Example slide from the Gettysburg Address as a PowerPoint presentation.

Education might also benefit from breaking away from PowerPoint tradition. In fact, there is an argument to be made that the use of PowerPoint in education reduces course content to an overly-simplified, pre-packaged learning experience [2]. Dr. Chris Waters at Michigan State University has moved to eliminate PowerPoint lectures altogether in his undergraduate Microbiology course. He is instead adapting the existing presentations into a series of chalk talks which are more conducing to communicating scientific ideas.


Perhaps the failures of PowerPoint are not about varied styles of communication across different domains of knowledge (scientific, business, legal), but more about the relevance of ideas and their overall structure. Relevance theory (Dan Sperber and Deidre Wilson) suggests that are biased according to what seems relevant [3]. Some of this is mediated by the cognition of attentional resources, but there is also an underappreciated role of cultural preferences and constraints. In the realm of science communication, the narrowly-defined relevance of typical PowerPoint design practice might encourage some aspects of scientific practice (science as memorization of facts, still images, simple graphs) at the expense of others (experimentation, data exploration, theory-building). 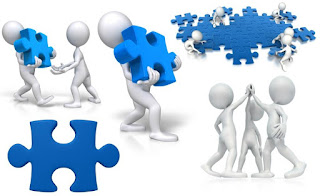 The tyrrany of representational orthodoxy, PowerPoint style. On the other hand, this is actually pretty good in terms of available clip art. While perfectly suitable for business-oriented communication (e.g. team-building, simple storytelling), this may or may not be suitable for other domains of knowledge.

So how does one break out from the restrictions of PowerPoint? One way forward is shown by the artistic community's use of PowerPoint as an expressive medium. Like the latter-day explosion of animated .gif art on Tumblr [4], artists have been using PowerPoint to create animations and short videos. Interestingly, the limitations of PowerPoint for representing alternate forms of argumentation does not seem to limit artistic innovation [5]. Perhaps this has to do with the use of symbols rather than the ambiguity of linguistic syntax.

A more argumentative-based way to approach PowerPoint is to adopt the Lessig Method of presentation [6], which presents ideas in only a few words in a large font. One example of this is Larry Lessig's "Free Culture" lecture, which connects a sequence of court cases and landmark ideas in sparse blocks of text. Whether this solves the ambiguity issue is not clear to me, but does provide a way to simplify without losing information. 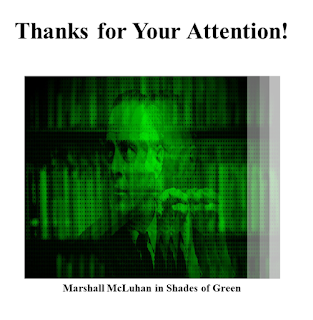 The last several talks I have given include a final "Thanks for your Attention" Acknowledgements slide which features a graphic that has something to do with attention (visual illusion and/or obscure reference). This is one such example featuring Marshall McLuhan (e.g. breaking the message out of the medium).


UPDATED (4/23): Here is a presentation to the Association of Computational Heresy by Tom Wildenhain on how to construct a Turing Machine with PowerPoint. While it is a lot of fun, it does bring to mind some more creative uses of PowerPoint.

[5] Greenberg, A. (2010). The Underground Art of PowerPoint. Forbes, May 11. Some examples of PowerPoint art (converted to YouTube videos) include:

a) "Infiltration" by Jeremiah Lee. 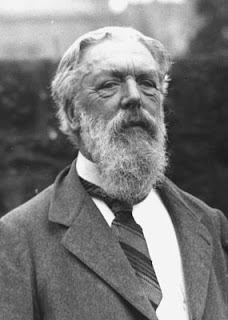 This year marks the 100th anniversary of "On Growth and Form" [1] by the biologist/ mathematician D'arcy Thompson. "On Growth and Form" has always been an intriguing book from both a historical and technical perspective [2]. This includes the integration of fields such as physics, developmental biology, and geometry. There is an entire website dedicated to the centennial, which demonstrates that his ideas are still useful today [3]. 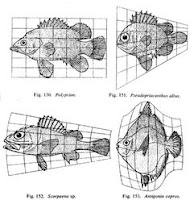 D'arcy Thompson provided an account of what we now call evo-devo [4] as a series of mathematical transformations. On the one hand, this provides a mathematical model for the static geometry of the developmental phenotype across species. On the other hand, Thompson provided few if any evolutionary, nor any genetic mechanisms, even in a time when both were becoming ascendant [5]. His physical approach to biological form and morphogenesis has not only been useful in biology, but also as inspiration for computational modeling approaches [6].

[3] Much of the contemporary innovation in this area is in the field of architecture. In modern evo-devo, it has taken a back seat to genetic manipulation. Given what we now know about evolution and genetics, there are some potentially interesting biological simulation to be done at the interface of regulatory mechanisms in development and phenotypic fitness based on biomechanical parameters.

[5] Deichmann, U. (2011). Early 20th-century research at the interfaces of genetics, development, and evolution: reflections on progress and dead ends. Developmental Biology, 357(1), 3-12.