For this Darwin Day (February 12), I would like to highlight the relationship between evolution by natural selection and something called category theory. While this post will be rather tangential to Darwin's work itself, it should be good food for thought with respect to evolutionary research. As we will see, category theory also has relevance to many types of functional and temporal systems (including those shaped by natural selection) [1], which is key to understanding how natural selection shapes individual phenotypes and populations more generally. 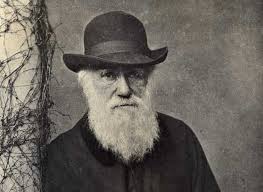 This isn't the last you'll hear from me in this post!

A category is defined by two basic components: objects and morphisms. An example of objects are a collection of interrelated variables or discrete states. Morphisms are things that link objects together, either structurally or functionally. This provides us with a network of paths between objects that can be analyzed using categorical logic. This allows us to define a composition (or path) by tracing through the set of objects and morphisms (so-called diagram chasing) to find a solution. 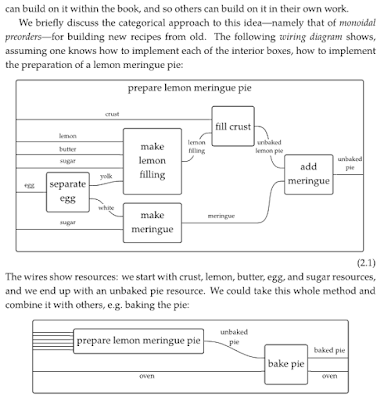 In this example, a pie recipe is represented as a category with objects (action steps) and morphisms (ingredients and results). This monoidal preorder can be added to as the recipe changes. From [3]. Click to enlarge.

Categories can also consist of classes: classes of objects might include all objects in the category, while classes of morphism include all relational information such as pathways and mappings. Groupoids are functional descriptions, and allow us to represent generalizations of group actions and equivalence relations. These modeling-friendly descriptions of a discrete dynamic system is quite similar to object-oriented programming (OOP) [4]. One biologically-oriented application of category theory can be found in the work of Robert Rosen, particularly topics such as relational biology and anticipatory systems. 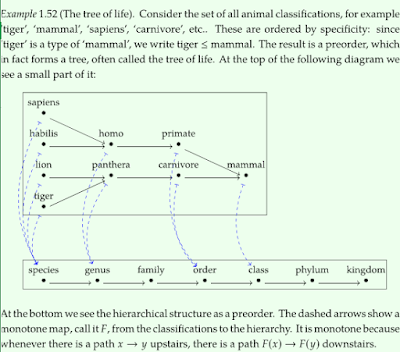 Animal taxonomy according to category theory. This example focuses on exploring existing classifications, from species to kingdom. The formation of a tree from a single set of objects and morphisms is called a preorder. From [3]. Click to enlarge.


One potential application of this theory to evolution by natural selection is to establish an alternate view of phylogenetic relationships. By combining category theory with feature selection techniques, it may be possible to detect natural classes that correspond to common ancestry. Related to the discovery of evolutionary-salient features is the problem of phylogenetic scale [5], or hard-to-interpret changes occurring over multiple evolutionary timescales. Category theory might allow us to clarify these trends, particularly as they relate to evolving life embedded in ecosystems [6] or shaped by autopoiesis [7].

More relevant to physiological systems that are shaped by evolution are gene regulatory networks (GRNs). While GRNs can be characterized without the use of category theory, they also present an opportunity to produce an evolutionarily-relevant heteromorphic mapping [8]. While a single GRN structure can have multiple types of outputs, multiple GRN structures can also give rise to the same or similar output [8, 9]. As with previous examples, category theory might help us characterize these otherwise super-complex phenomena (and "wicked" problems) into well-composed systems-level representations.

[4] Stepanov, A. and McJones, P. (2009). Elements of Programming. Addison-Wesley Professional. 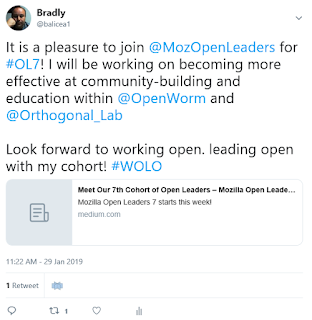 I have been selected into the Mozilla Open Leaders program as a cohort member. This is the seventh edition of the program (hence the abbreviation OL7), and runs for 14 weeks. During this time, I will learn how to better leverage digital tools for building online communities. I am working within the OpenWorm Foundation to apply these principles to a specific context. 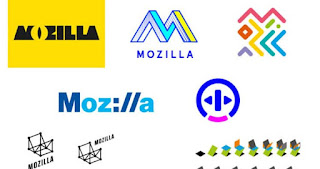 An example of "open branding" (iterative logo design as a series of blog posts).


The hashtag #WOLO also serves as the guiding principle of Open Leaders: work open, lead open. Open Leaders come from all walks of life, and all sorts of digital organizations. I am in cohort A, which is part of the project track. Together, we will work to improve the "health" of the internet.
Posted by Bradly Alicea at 10:26 AM No comments: