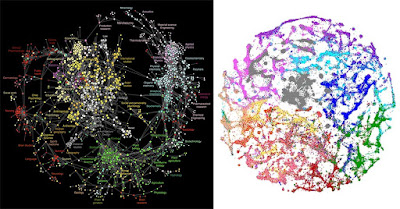 LEFT: A network of scientific disciplines and concepts built from clickstream data. RIGHT: Science mapping based on relationships among a large database of publications. COURTESY: Figure 5 in [1] (left) and SciTech Strategies (right).

Having a diverse background in a number of fields, I have been quite interested in how people from different disciplines converge (or do not converge) upon similar findings. Given that disciplines are often methodologically distinct communities [2], it is encouraging when multiple disciplines can exhibit consilience [3] in attacking the same problem. For me, it is encouraging because it supports the notion that the phenomena we study are derived from deep principles consistent with a grand theorizing [4]. And we can see this is areas of inquiry such as learning and memory, with potential relevance to a wide variety of disciplines (e.g. cognitive psychology, history, cell biology) and the emergence of common themes according to various definitions of the phenomenon. 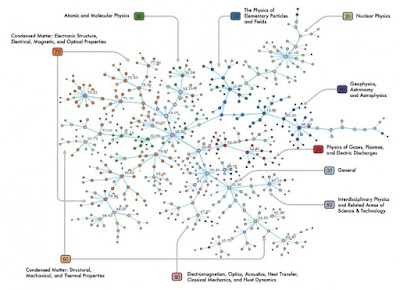 Maximum spanning tree of disciplinary interactions based on the Physics and Astronomy Classification Scheme (PACS). COURTESY: Figure 5 in [5].

The ability to converge upon a common set of findings may be an important part of establishing and maintaining coherent multidisciplinary communities. Porter and Rafols [6] have examined the growth of interdisciplinary citations as a proxy for increasing interdisciplinarity. Interdisciplinary citations tend to be less common than within-discipline citations, while also favoring linkages between closely-aligned topical fields. Perhaps consilience also relies upon the completeness of literature inclusion for people from different disciplines in an interdisciplinary context. Another recent paper [7] suggests that more complete literature citation might lead to better interdisciplinary science and perhaps ultimately consilience. This of course depends on whether the set of evidence itself is actually convergent or divergent, and what it means for concepts to be coherent. In the interest of not getting any more abstract and esoteric, I will leave the notion of coherence for another post.

[4] Weinberg, S. (1993). Dreams of a Final Theory: the scientist's search for the ultimate laws of nature. Vintage Books, New York.

The DevoWorm group has two new students that will be working over this summer on topics in computational embryogenesis. To begin their projects, I have asked each student to prepare a short presentation based on their original proposal, which serves as a variant of the traditional "Hello World" program. We will then compare this talk with one they will give at the end of the summer to evaluate their learning and accomplishment trajectory.

One student (Siddharth Yadav, who is a current Google Summer of Code student) is interested in pursuing work in computer vision, machine learning, and data science, while the other (Josh Desmond, a Google Summer of Code applicant) is interested in pursuing work in computational biology and modeling/simulation. You may view their presentations (about 20 minutes each) below, and follow along with their progress at the DevoWorm Github repository [1]. 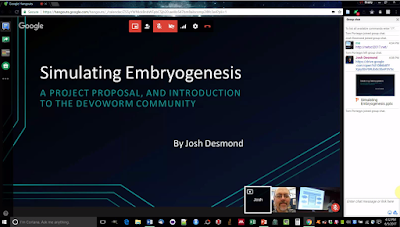