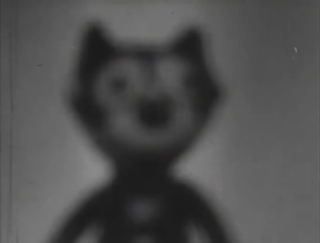 
The Orthogonal Research Laboratory, in conjunction with the OpenWorm Foundation, is starting to experiment with live video content. We are using YouTube Live, and live streams (composed in Xsplit Broadcaster) will be archived on the Orthogonal Lab YouTube channel. The intial forays into content will focus on research advances and collaborative meetings, but ideas for content are welcome.

[1] obscure reference of the post: a shot of Felix the Cat, whose likeness was used to calibrate early experimental television broadcasts.
Posted by Bradly Alicea at 12:31 AM No comments:

War of the Inputs and Outputs 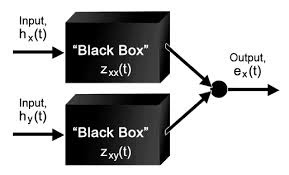 Earlier this Summer, I presented a talk on sub-optimal cybernetic systems at NetSci 2017. While the talk was a high-level mix of representational modeling and computational biology, there were a few loose ends for further discussion.

One of these loose ends involves how to model a biological system with boxes and arrows when biology is a multiscale, continuous process in both space and time [1]. While one solution is to add as much detail as possible, and perhaps even move to hybrid multiscale models, another solution involves the application of philosophy.

From a predictive standpoint, this method is imprecise. It does, however, get around a major limitation of black box models -- namely what a specific black box is representative of. It makes more sense to black box an overarching feature or measurement construct than to constrain biological details to artificial boundaries. 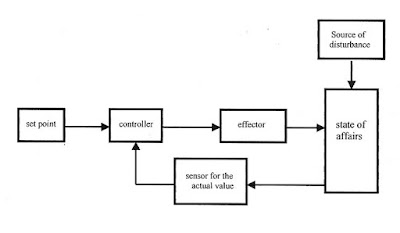 A traditional cybernetic representation of a nonlinear loop. Notice that the boxes represent both specific (sensor) and general (state of affairs) phenomena.

The black box also changes through the history of a given scientific field or concept. In biology, for example, the black box is usually thought of as something to ultimately break apart and understand. This is opposed to understanding how the black box serves as a variable that interacts with a larger system. So it might seem odd to readers who assume a sort of conceptual impermanence by the term "black box". 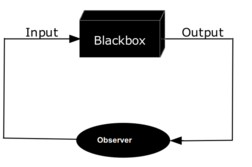 A somewhat presumptuous biological example: in the time of Darwin, heredity was considered to be a black box. In the time of Hunt Morgan, a formal mechanism of heredity was beginning to be understood (chromosomes), but the structure was a black box. By the 1960s, we were beginning to understand the basic function and structure of genetic transmission (DNA and gene expression). Yet at each stage in history, the "black box" contained something entirely different. In a fast moving field like cell biology, this becomes a bit more of an issue.

A realted cultural problem in biology has involves coming to terms with generic categories. This goes back to Linnean classification, but more generally this applies to theoretical constructs. For example, Alan Turing's morphogen concept does not represent any one biological agent, but a host of candidate molecules that fit the functional description. Modern empirical biology involves specification rather than generalization, or precisely the opposite goal of theoretical abstraction [3]. 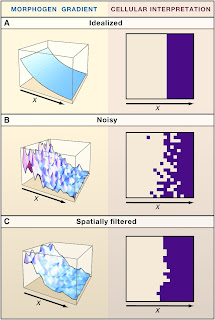 The relationship between collective morphogen action and a spatial distribution of cells. COURTESY: Figure 4 in [4].

Within the black box itself, processes can create, destroy, or transform. They can synthesize new things out of component parts, which hints towards black box processes as sources of emergent properties [5]. Black boxes can also serve to destroy old relationships, particularly when a given black box has multiple inputs. Putting a little more detail to the notion of emergent black boxes involves watching how the black box transforms one thing into another [6]. This leads us to ask the question: do these generic transformational processes contribute to increases in global complexity? 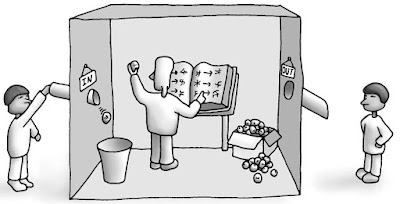 Perhaps it does. The last insight about inputs and outputs comes from John Searle and his Chinese Room problem [7]. In his model of a simple message-passing AI, an input (in this case, a phrase in Chinese) is passed into a black box. The black box processes the input either by mere recognition or more in-depth understanding. These are referred to as weak and strong artificial intelligence, respectively [7]. And so it is with a cybernetic black box -- the process within the unit can be qualitatively variable, leading to greater complexity and potentially a richer representation of biological and social processes.

NOTES:
[1] certainly, systems involving social phenomena operate in a similar manner. We did not discuss social systems in the NetSci talk, but things discussed in this post apply to those systems as well.

[2] for those whom are familiar, this is quite similar to the mind-brain problem from the philosophy of mind literature, in which the mind is a model of thought and the brain is the mechanism for executing thought.

[3] this might be why robust biological "rules" are hard to come by.

[5] while it is not what I intend with this statement, a good coda is the Sidney Harris classic "then a miracle happens..."