Your Strandbeests Want to Engage in Sodaplay 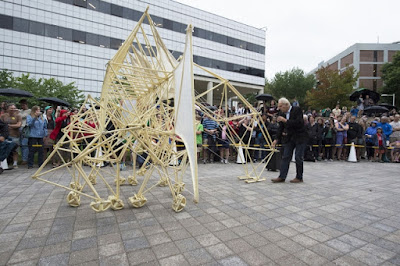 The strandbeest Animaris Ordis in an non-native environment (a visit to MIT).

Several years ago [1], I discovered the wonder that is Theo Jansen's Strandbeests (beach beasts in Dutch). Strandbeests are mechatronic creatures partially designed using evolutionary algorithms and built to roam the sands (or are at least demonstrated at the beach). Standbeests mimic the movement patterns of biological animals, despite having only approximations of limbs and joints. Some of these creatures even have a "stomach" without conventional animal muscles [2]. 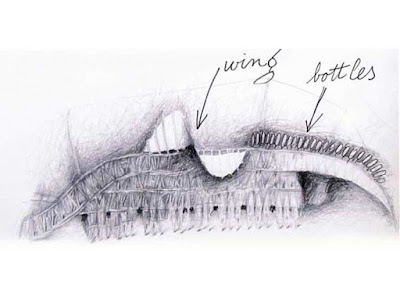 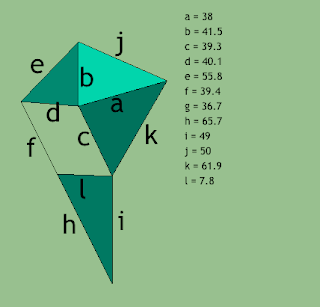 A Strandbeest forelimb with each segment in its optimized proportions [3]. Jansen calls these "magic numbers", but in biological terms they more closely resemble allometric scaling.

While there is great artistic (kinetic sculpture) and scientific (biomechanical) value to the Strandbeest, it can also teach us a great deal about the ability of point masses to approximate biological movement. For the Strandbeests are reminiscent of another model of movement, this one being entirely digital. This model, Sodaplay, is actually a classic internet-based application first developed around the year 2000. Sodaconstructor allowed people to build animated creatures based on point physics and an approximation of muscle activity (via central pattern generation). 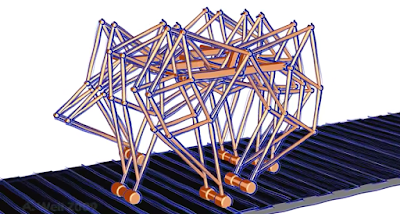 In the sodaplay model, a mass-spring system is used to provide structure to the phenotype. Springs (connectors) are used to approximate muscles and connect point masses, which provide inertial responses to gravity and motion [4]. These connectors can be modulated as desired, going beyond the default sinusoidal response. In general, a networked mass-spring model can be used to examine the geometric effects of a phenotypic configuration. Depending on how the points are arranged, certain ranges of motion are possible. In the case of sodaplay, certain configurations can also lead to certain death (or collapse of the model due to gravitational conditions in the virtual environment). 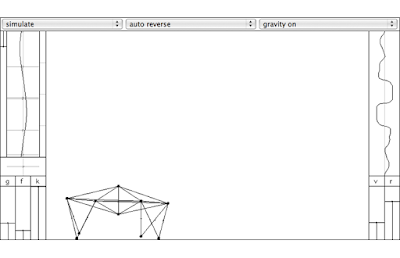 An example of the Sodaconstructor (seemingly now defunct). Sodaplay models (for example, Daintywalker) are reliant upon the human expertise and perceptual selection [5] rather than natural selection. Nevertheless, this form of constructivist selection has results in nearly boundless innovation, and Sodarace allows humans to innovate against a genetic algorithm.

An approximation of quadrupedal gait in Strandbeests by tracing joint and end-effector movement. COURTESY: [6].


UPDATE (6/15):
A regular reader of this blog (Dr. Richard Gordon) provided an insight that the blog's commenting system was not able to post: "It seems to me that Strandbeasts and tensegrity structures are special cases of a broader class of objects, which may be instantiated by cytoskeleton and its motor and attachment proteins".

Indeed, there are some interesting linkages between biomechanical systems and tensegrity structures that have yet to be explored. In the case of Strandbeests, Theo Jansen has actually hit upon very different (but equally functional) biomechanical systems for "limb movement" and "stomach movement". While Strandbeests do not have biological muscle (and its associated biochemistry), nor the ability to produce isometric force, they can still produce powered movements.

While I have not been keeping up with my blogging habit over the last 18 months or so, Synthetic Daisies is still reaching milestones. As of today, we have reached 200,000 reads! While this took 7 years and 6 months (as of June 15), it is quite a milestone. A few historical points.


Frequency of posts over time 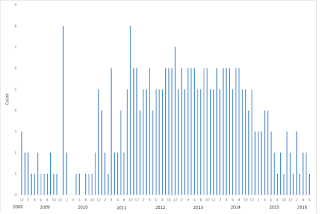 The bulk of posts (particularly the longer posts) were written during a period from late 2011 to early 2015. Some of them have had longer lifetimes than others, as you will see below.


Here is a reading list with some of the lesser-read but perhaps most interesting posts in the blog's history.

Academic Connectivity and the Future of Scientific Ideas. September 9, 2011.

Metabiology and the Evolutionary Proof. January 11, 2013.

The "nature" of materials: evolution and biomimetics. December 26, 2011.

Reflections on Chaos in Biological Evolution. May 25, 2013.

The Neuromechanics and Evolution of Very Slow Movements. April 18, 2012.


Systems Biology:
Modeling Processes with No Beginning, an Adaptive Middle, and No End. October 27, 2013.


Although the blog got off to a slow start, I learned a lot about "how to blog" (use interactive media to greater effect) over the course of time. Nevertheless, hooray for 200K!
Posted by Bradly Alicea at 12:01 AM No comments: