Rectified and Ramifying Representations for the Purpose of Theoretical Expediency

One aim of the DevoWorm project is to take a tree structure (in this case a cell lineage tree from an embryo) and extract distributed structural information. This is done to find previously undiscovered patterns in early development (embryogenesis). One way in which this can be accomplished is by building undirected complex networks to represent the relationships between three-dimensional cellular position in a point model of the embryo. Indeed, rather than a branching tree, we are left with a much larger tree with a significant number of cycles. This allows us to examine previously undiscovered interactions between cells based on proximity (such as juxtacrine and paracrine signalling). 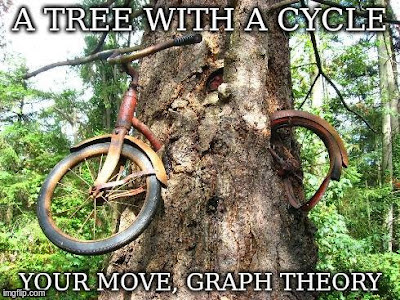 A tree with a cycle, indeed. Popular meme or research problem?

Now these ideas have been made concrete in the form of a poster and presentation that describe the methodology and results of representing approximations of cell nuclei in the embryo as a connected network. This work has been featured at the Network Frontiers Workshop (Northwestern University) and the Midwest Regenerative Medicine Meeting (Washington University, St. Louis). Here is the poster in slide form: 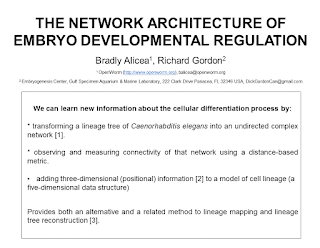 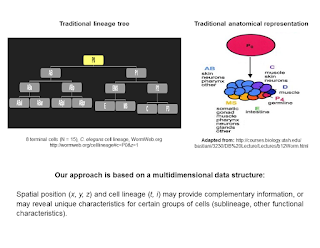 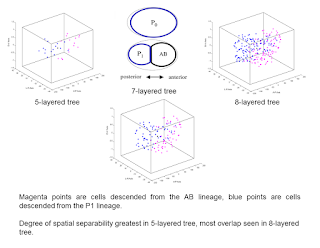 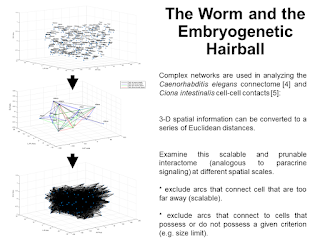 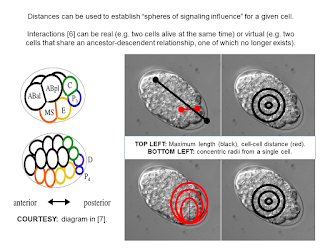 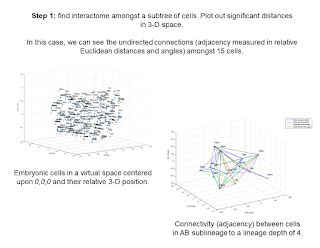 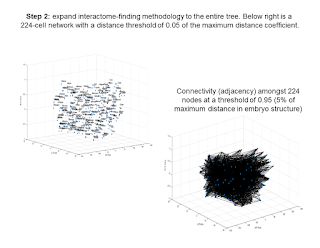 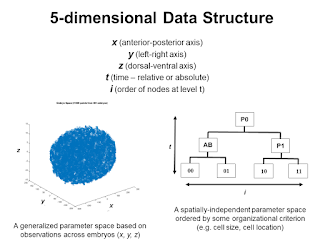 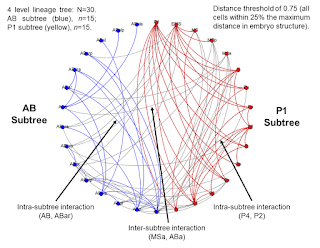 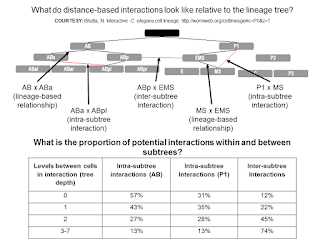 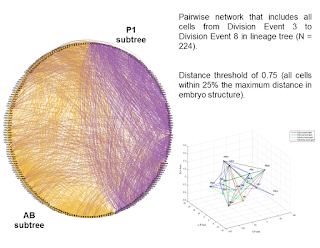 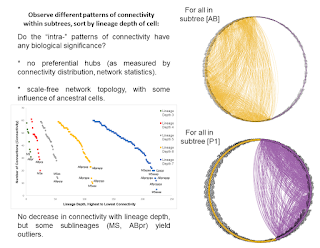 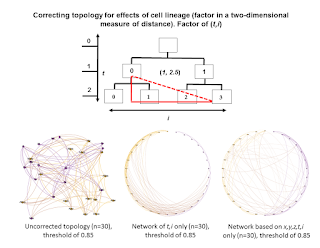 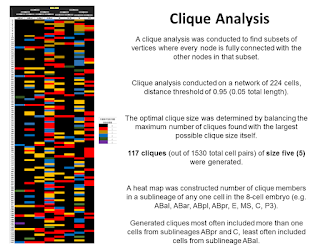 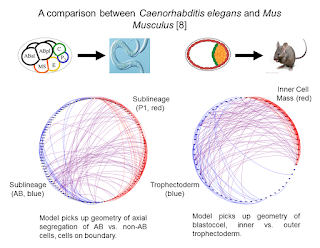 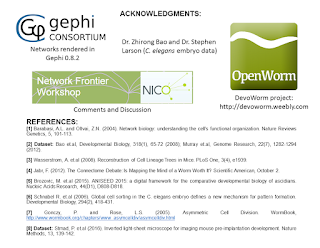 Notice how this approach is both geometrically vivid and extensible to different modes of development. The graphs and statistics were rendered in Gephi, and other computation was done in MATLAB and R. Our next steps include developing customized modules in Gephi for drawing differentiation trees, developing hybrid directed acyclic graph (DAG)/undirected network graph structures, and refining the network construction methodology.

We are also working on a methodology called the scalable interactome, which simply involves using graphs to visualize and extract information at multiple spatial and temporal scales. One current example of this is OneZoom explorer, which renders the tree of life in a fractal manner. This can be extended to exploring the fractal and complex geometric nature of the embryo itself. 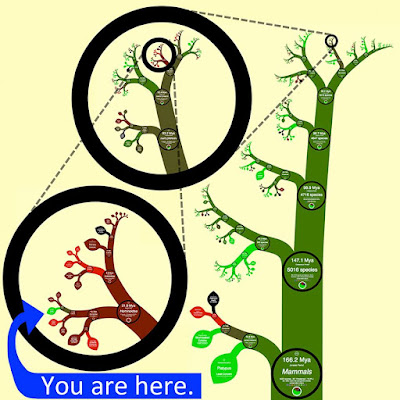 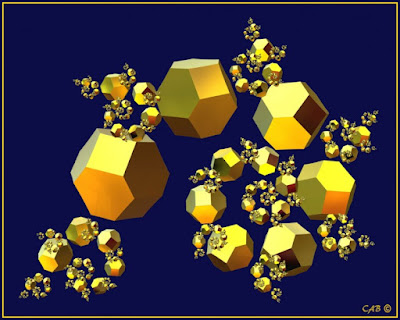 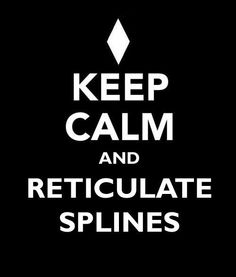 With that nod to complexity, I would be remiss if I did not mention the old SimCity dictum? A gratuitous image of fractals and reference to a Wil Wright easter egg is the perfect way to end this post.
Posted by Bradly Alicea at 8:30 PM No comments:

It's a bird! It's a plane! It's a simulated cognitive epiphenomenon! 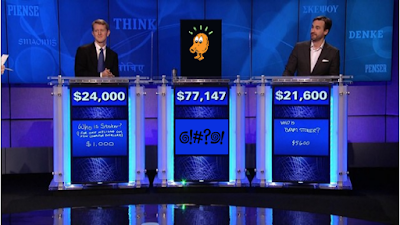 Is it a robot, or is it a human? Sometimes, the conclusions overlap. The first picture refers to the profanity habit picked up by IBM’s Watson early in the course of its training. It must be disconcerting to hear the word “bullshit” in a synthetic voice (even if it’s Q*bert). A more recent example of this comes from Microsoft's ill-fated attempt at politically-correct AI, giving us more of a robo-fascist instead [1]. 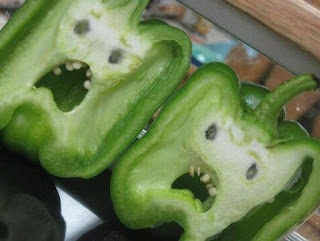 Speaking of artificial systems that reveals the less-promoted side of intelligent behavior, I have run across a number of references to the computational exploration of artificial pareidolia [2]. Having first-hand experience with this phenomenon on Facebook, it's nice to see people exploring this oft-maligned feature of human cognition using artificial intelligence.

In these two articles [3, 4], studying digital pareidolia means generating certain types of false-positive using facial recognition software. Whether this highly-restricted definition [5] qualifies as the study of neurological pareidolia, there are many shapes and patterns that have many of the features found in faces [6].

Another way to study digital pareidolia is to evolve faces from a series of overlapping shapes [7]. In this way, we can see exactly how machine learning algorithms come to define a face in both a holistic and feature-based sense. The faces themselves can be evolved using genetic algorithms to breed faces that self-assemble, as has been implemented in an interactive algorithm called Pareidoloop.


NOTES:
[1] the goal was not actually to build a politically-correct AI, only a Twitterbot that did not pick up the worst habits of humanity. The project has since been terminated.

[5] One problem with this definition involves the restriction of the pareidolia phenomenon to faces. The other (and potentially more significant) problem is that biologically speaking, faces (and perhaps other objects) may be processed holistically rather than by evaluating sets of landmarks.

[6] For more reading on the topic, please see: