Ready to Start to Google Summer of Code 2018! 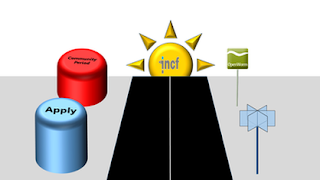 Currently at the red roadhouse on the left-hand side of the road.

On your mark, get set, go! We are quickly traveling down the Google Summer of Code (GSoC) road! First, a welcome to the three students I will be mentoring: Arnab Banerjee (Pune University), Sam Felder (University of Illinois Urbana-Champaign), and Cheng-Hsun Hsueh (National Yang-Ming University).

Arnab will be working within the OpenWorm Foundation on "Physics-based XML Model-building for the Mosaic Embryo", while Sam and Cheng-Hsun will be working on "Contextual Geometric Structures of Cultural Behavior ". 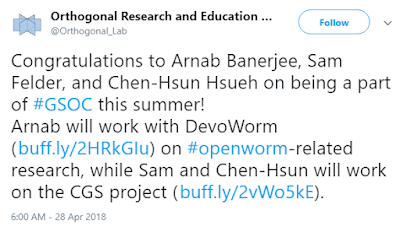 This tweet says it all. Check in on the DevoWorm and Representational Brains and Phenotypes group activities throughout the Summer for updates.

We are currently in the Community Period, which lasts until the coding period begins (May 14). Towards the end of Community Period, each student will present a 15-20 minute presentation on their accepted proposal, including additional insights on what will make their project successful. Stay tuned!
Posted by Bradly Alicea at 1:01 AM No comments:

What inspired this post was both an interesting question from Twitter user @ID_AA_Carmack, CTO at Oculus VR and a long-suffering manuscript I have been trying to get into publication with some collaborators [1]. With reference to the former: 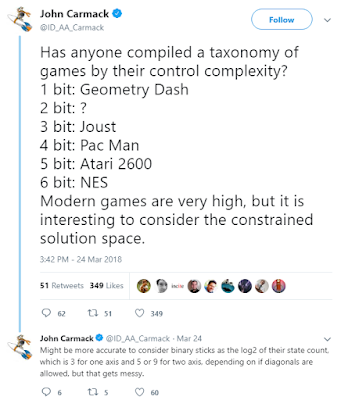 In the accompanying thread, someone mentioned that the classic game Tempest used a paddle controller, and therefore was an example of analogue control (and outside the scope of John's taxonomy). But in general, joystick and button-press control provide a measure of complexity for a wide variety of games.

Let's begin by highlighting a 2-bit game. Two examples of a 2-bit game (in terms of control) are Pong and Breakout. In both games, the player uses a single controller to move a virtual paddle back and forth across the screen [2].

A screenshot of Pong (left) and Breakout (right) and the degrees of freedom per player. Each degree of freedom (movement along the right-left axis) represents 2 bits of information.

And here is a picture of the Joust arcade console and its 3 bit control mechanism.

The Joust joystick provides 2 bits of control (left on/off and right on/off), and the button is 1-bit of control (press or no press). This is sufficient complexity to control the action, but not enough complexity to account for all observed action in the game.

Pac-Man utilizes a maze rather than linear action, but has only one additional degree of control complexity. Here are some screenshots from the game (click to enlarge) 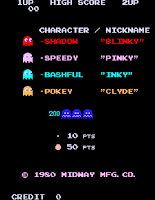 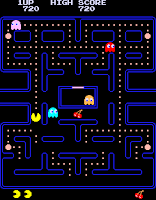 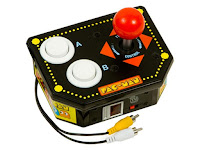 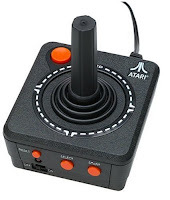 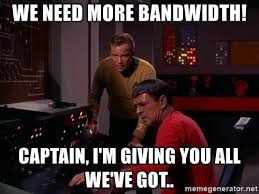 A taxonomy of computational classes for Pac-Man and other games is described by [3-5]. While Pac-Man is considered an NP-hard game, not all video games are. Furthermore, games that are in the same computational class do not have the same types of objectives or in-game properties. The games Tetris [6] and Minesweeper [7] have been found to be NP-complete. This is likely based on the combinatorial properties of each game.

According to Aloupis et.al [8,9], Super Mario Brothers can be classified as NP-hard. Other Nintendo games, such as Donkey Kong Country, are PSPACE complete. The Nintendo examples are interesting from an approximation perspective, as several Nintendo games have been reclassified by this research group between 2012 and 2016 [8,10].

The criterion are based on things like how the avatar moves within the game's activities. A game like Pac-Man involves so-called "location traversal" [4], which in computational terms is similar to the travelling salesman problem (NP-hard) [3].  By contrast, a game like Breakout involves a balancing maneuver [see 2] that is solvable in LSPACE. 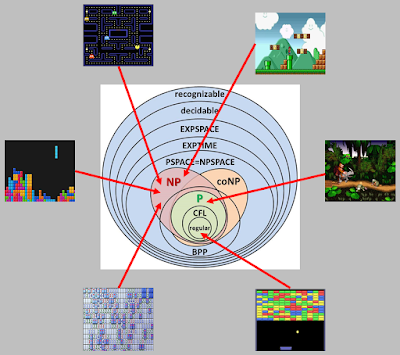 Human information processing (or performance) can be characterized in the form of informational complexity. One classic way to assess complexity in performance is the use of psychometric laws [11]. Invariants relevant to video game performance are Fitts Law (hand-eye coordination), the Weber-Fechner Law (just noticable differences in stimulus intensity), and Stevens Law (the perception of physical stimuli relative to intensity). In the case of Fitts Law, the index of difficulty is often expressed as a function of bandwidth (bits/second). This provides a real-time expression of complexity that can be compared across games. Similarly, the presence of signal relative to noise can be expressed in terms of information content (Shannon-Hartley theorem). The stimulus information available to the game player may or may not be congruent with control complexity and in-game combinatorial complexity [12]. Accounting for all three dimensions of this complexity is an avenue for further study.

[2] Many early video games were designed around simple programming benchmarks. Games such as Pong and Breakout take inspiration from the pole-balancing problem, while the game Qix takes inspiration from k-D partitioning. In this case, the human serves to solve the computational problem, however inefficiently.

[6] Demaine, E.D., Hohenberger, S., and Liben-Nowell, D. (2003). Tetris is hard, even to approximate. Proceedings of the International Computing and Combinatorics Conference, 351–363.

[8] Demaine, E.D., Viglietta, G., and Williams, A. (2016). Super Mario Brothers is harder/easier than we thought. Proceedings of the International Conference on Fun with Algorithms.

[11] One challenge in linking psychophysical complexity to video game perception is in capturing the entirely of what is cognitively extracted from the game environment.

There is a recurring insider reference among Very Serious Computer Users regarding using Microsoft products to perform sophisticated computational tasks [1]. While most people tend to think of these programs as not computationally sophisticated, programs such as Excel [2], PowerPoint [3], and even MS Paint can do some pretty powerful computing. One such example are 3-D Models enabled by object/shape manipulation in PowerPoint and Paint.

Around every April 1, Carnegie Mellon University students participate in an annual tongue-in-cheek conference (sponsored by the satirical Association for Computational Heresy) called SIGBOVIK (Special Interest Group on Harry Questionable Bovik). Not sure what where Harry Q. Bovik got his credentials, but if you enjoy the Ig Nobel Awards, this should be right up your alley.

SIGBOVIK often features highly interesting quasi-research [4] projects based on the aforementioned Microsoft program suite. But there are other groups creating programs and computational artifacts because they can. Here are a few examples of this collected from around the web: 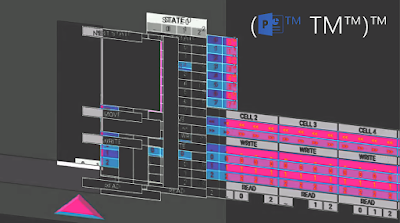 The (non-) Turing Completeness of PowerPoint. One of many computational artifacts that are Turing incomplete. COURTESY: Tom Wildenhain YouTube channel and HackerNoon.

3) Try out this version of Doom programmed in Excel, courtesy of Gamasutra. The game program runs on a series of equations that requires VBA to run. There are several files you need to download, and the blogpost goes through the full set of challenges. 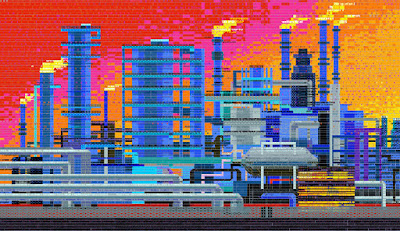 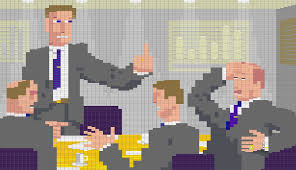 4) The final example returns us to SIGBOVIK (2016), where David Fouhey and Daniel Maturana bring us ExcelNet. This is an architecture for Deep Learning in Excel, and has gone through the paces of the Kaggle MNIST competition. Another example features Blake West and his implementation of a deep learning architecture in Google Sheets.

NOTES:
[1] This is similar to advertising membership in the cult of LaTeX, touched upon in this discussion of LaTeX fetishes.

[2] the first spreadsheet (Autoplan) was developed in the form of a scripting language, which is a more general version of more formal programming languages (e.g. Java versus Javascript).

[3] presentation software can be pretty diverse. But is any of it Turing Complete (TC)? If you work out your design process using Wang Dominoes, then perhaps TC-ness can be realized. 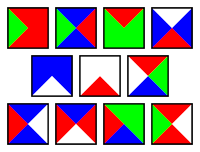 Example of a Wang tile.

[4] definition of quasi-research: research projects that do not produce useful results directly, but often as a side-effects of the research process itself.

[5] by combining the world of image rasterization with interlinked linear equations, there are some exciting (but conceptually and technlogically undeveloped) opportunities in this space.
Posted by Bradly Alicea at 12:01 AM No comments: