On the recreation portion of my personal website, I have assembled in collection of assorted demos from across the web. These are largely Java apps, but point to interesting scientific simulations and games I have encountered over the years: 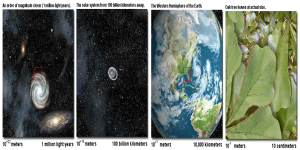 This is a favorite of mine whenever I explain the concept of spatial "scale" to people. "Scale" is a conceptual variable that explains the relative size of objects. For example, your body is at a different scale than its constituent cells. This application will show you how your perspective changes as you move from larger to smaller scales. This concept is key to understanding emergent phenomena, as processes in such self-organized structures occur at many scales (from microscopic to universal). 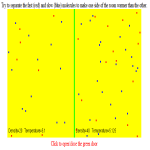 Maxwell's Demon is a simulation that demonstrates the second law of thermodynamics though showing two chanmbers with a door that separates them. This door can be opened to let particles in and out. The object is to be selective in opening the door so that the particles (which move stochastically inside each chamber) all move to either one chamber or another. The demo shows that this is impossible given random movement of particles. 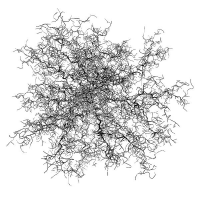 The concept of diffusion is related to Maxwell's Demon in the sense that the particles in each chamber are propeled by diffusion rather than a controlled or pre-determined process. Diffusion can be thought of as being "random", with no inherent directionality. So how do structures like the one above arise? As you can see in the simulation, particles that move across a space at a particular rate will aggregate if they come into contect with either a stationary object or each other. In this case, particles that follow these simple rules will collectively give rise to a complex branching structure from a single point. This explains branching patterns seen in the morphogenesis of the lung and other organs. 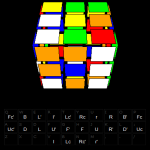 This is a classic game from my youth, and can actually be manipulated and solved using the simulations I provide links to. Each side of a cube consist of nine squares, all of the same color or pattern. The cube is scrambled, the object of the game being to return the cube to its pre-scrambled state. This is a good way for students of complexity to explore combinatorial processes. I have heard of people using it to teach the basic premise of evolutionary algorithms, and its provides many hours of problem-solving fun.
Posted by Bradly Alicea at 9:23 AM No comments:

Posted by Bradly Alicea at 9:27 AM No comments:

Interesting things from the Makezine Blog

Today I was looking around the Makezine blog, blog of the Maker movement. For those of you who not familiar with the Maker movement, it is an attempt to get people to make things. It is an outgrowth of the do-it-yourself (d.i.y) movement. They will be having a get-together in Metro Detroit at the Henry Ford at the end of this month (July 30-31). I am sharing three highlights from the blog below:

Learning to work with carbon fibres

Open PCR
Posted by Bradly Alicea at 7:00 PM No comments: 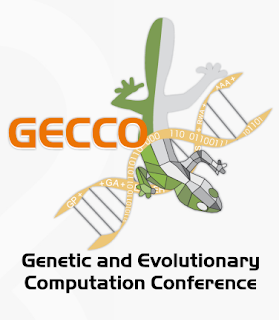 The GECCO conference is coming up on July 12-16th in Ireland. I was looking through the proceedings, and it looks like there are some good papers being presented. While I won't be attending, the GECCO conference is always a good source for state-of-the-art research in artificial life, ant colony optimization, genetics-based machine learning, and more.
Posted by Bradly Alicea at 6:58 PM No comments: