The Neuromechanics and Evolution of Very Slow Movements

In January 2012, I wrote a blog post on very fast movements that focused on examples from insects. Now I would like to focus on very slow movements. The phylogenetic constraints and conditions for very slow movements are much the same as for fast movements. In this blog post, I will briefly touch on specific examples, although the types and scope of adaptation could be extended to examples from your favorite animal clade.

The Slow Loris (Genus: Nycticebus) is a strepsirrine Primate species that has lost the ability to jump from tree to tree. In response, slow lorises have evolved a very slow movement repetoire [1, 2]. These very slow movements (at least relative to other Primates) are typified by very deliberate, hand-over-hand locomotion that guides the feet forward. This type of evolutionary specialization requires coordinated changes in movement biomechanics, muscle phenotypes, and neural control. Within the clade Primates, there exists a diversity of specialized movement modalities. From this diversity, Primates are able to execute movements as wide-ranging as fast ballistic movements and slower, complex movements that enable brachiation and dancing. The very slow locomotion of the slow loris fits into this scheme (see Figure 1).

In my previous post on very fast movements, I discussed a model of characterizing human upper-limb movements called the speed-accuracy tradeoff. This is not traditionally considered as an evolutionary tradeoff, but rather as a functional trade-off. If a movement is executed with great speed, the accuracy of that movement with regard to a target location is reduced. To increase accuracy, the movement must be slowed down. Part of this is due to limb biomechanics and neural control: limbs with limited degrees of freedom are particularly constrained by an ability to quickly plan movements. But the capacity to create and control intentional movements is enabled by muscle fiber composition. While fast-twitch muscle fibers allow for quick bursts of movement, slow-twitch (and associated slow tonic) fibers allow for slower, sustained movements.

Likewise, there is a tradeoff between the ability to create "fast" movements and the quick onset of muscle fatigue. Muscles composed mainly of these fibers will produce large forces, but fatigue quickly. In the slow loris, the loss of leaping and the subsequent evolution of “slow” movements can be seen in the muscle fiber composition of both upper and lower limbs. Specifically, these composition of these muscles is dominated by slow twitch fibers and completely lack fast twitch glycotic fibers in the hindlimbs [3]. These fiber types are shown in context in Figure 2. 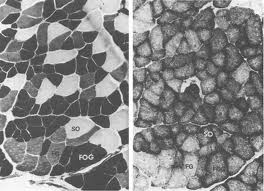 In the case of very slow movements, a slow down-accuracy tradeoff may exist that is inversely related to the speed-accuracy tradeoff and more directly related to an evolutionary tradeoff. In the case of very slow intentional movements in an organism that usually generated much faster movements, the severely slowed-down movements will exhibit a lot of motor noise related to the overproduction of force relative to what is required to maintain a very low speed. This suggests that barring major innovations in limb morphology, changes in muscle fiber composition would be required to enable movements that are slowed down many orders-of-magnitude. Even with these adaptations, there still exists a tradeoff between accuracy and speed.

In other vertebrate clades, work has been done on characterizing muscle fiber contributions to the slowed-down movements (see Figure 3) of the turtle species Trachemys scripta elegans (red-eared slider). In [5], several neck muscles were pre-selected for study based on their oxidative capacity. In these muscles, slow tonic (SO) fibers predominate, and are widespread in most turtle muscles [6]. As it turns out, the predominance of SO fiber type is due to their special functional role. In addition, the contribution of SO fibers to force generation is only significant in highly oxidative muscles. As in the case of the slow loris, this suggests that SO fibers become predominant in a set of muscles to dampen force and power output, thus slowing down movement. 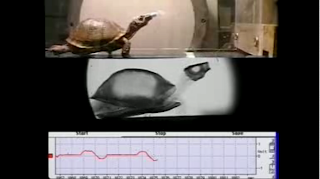 Since a new adaptation acts to scale down accuracy relative to force production, a movement which would be highly accurate in the context of the sister taxon would be an uncontrollable movement in the context of the slow movement adapted species. This is isometrically-scaled [7] across movement speed regimes (see Figure 4). Scaling is a common theme in muscle evolution [8, 9], and is related to the co-evolution of muscle cross-sectional size and limb length [10]. One could also imagine that organisms requiring very fast movements could adapt both very fast AND controlled movements given the proper morphology. 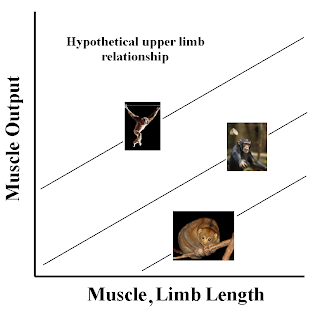 Figure 4. A schematic that demonstrates the concept of isometric scaling. In this case, the relationship between peak muscle force production (power) and muscle limb length are predicted to scale to distinct regimes specific to individual species. As the force production requirements of the upper limbs change across phylogeny, so does the evolution of neuromuscular control.

Adaptations in neuromechanical control can also be understood in terms of an evolutionary constraint. We can demonstrate this by using a gedanken experiment involving high-degrees of morphological specialization related to movement speed (see Figure 5). In woodpeckers (Family: Picidae), the neck and beak are specialized for drilling holes into tree trunks. This requires several specializations in the neck joint and upper-body muscles that enable repetitive, precision movements that generate large forces [11, 12]. 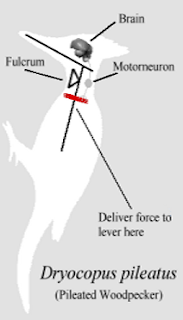 Figure 5. An abstraction of woodpecker beak drilling behavior-related morphology to the structure of a simple machine.

In Figure 5, we can see that a number of evolutionary specializations in the upper body and head are required to enable beak drilling behavior. This behavior requires the neck to pivot like a fulcrum, which allows forces generated in the neck muscles to be transferred to the beak tip. There are also associated adaptations related to protecting the brain from inertial feedback which are necessary from a functional perspective. All of this is dependent on changes in muscle fiber composition and recruitment, and rhythmic movement behavior that maximizes force production relative to energetic requirements in many different contexts [13].

How does this model inform our understanding of very slow movements? By helping us understand that specialized neuromechanical phenomena such as the slowing down of movement behavior and control in one taxon relative to other species in its clade requires a complex set of co-evolutionary responses. This creates unique conditions and involves tradeoffs that are not usually considered in studying the origins of adaptive movements.

References:
[1] Sellers, W.I. (1996). A biomechanical investigation into the absence of leaping in the locomotor repertoire of the slender loris (Loris tardigradus). Folis Primatologica, 67, 1-14.

[7] Isometric scaling is characterized by a series of parallel functions. Isometry is often the alternative hypothesis to allometric scaling, or predicted proportional growth relationships, among different species.